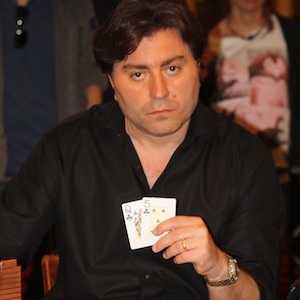 A German court has sentenced poker cheat and former WPT winner Ali Tekintamgac to three years and five months in prison for five counts of fraud. The German man who is of Turkish origin was arrested in September on suspicion of being the ring leader of a poker cheating gang. Tekintamgac pleaded guilty to the charges that related to incidents of cheating at a local German casino.

However, back in 2010 the player was disqualified from the Partouche Poker Tour for using a network of live “bloggers” stationed strategically around his table to indicate the cards of other players via a system of signals and hand gestures.

In 2010, Tekintamgac appeared to be just another German player tearing through the European circuit, at a time when his fellow countrymen were emerging as a dominant force on the European stage. He placed first in the WPT Spanish Championship, Barcelona for € 278,000 ($ 343,307) in May, and a string of deep finishes followed before he ended up on the final table of the Partouche Poker Tour to play for a first prize of €1.3 million ($1.82 million).

It was here that he came unstuck, however, when footage from earlier in the event surfaced that appeared to provide evidence of signaling from an accomplice.

It was compelling enough for the tournament organizers to disqualify Tekintamgac, who lay fourth in chips, and handed the footage over to the authorities. The prize money levels were adjusted so that Tekintamgac’s share would be distributed among the remaining eight players, and play was resumed, with Vanessa Selbst taking the top spot.

It emerged soon after that members of the poker media had been concerned about the behavior of the player and his fake journalists at the EPT Tallinn, earlier in the year, where Tekintamgac placed 36th. Footage later emerged from the WPT Barcelona showing one of the bloggers from the damning Partouche clip, a cameraman, standing behind Roberto Garcia, Tekintamgac’s opponent in the heads-up, his camera pointing directly at Garcia’s hole cards during the final champion-winning hand.

Tekintamgac, however, showed no remorse for his alleged actions, denying all accusations and launching court action against Partouche for the loss of his potential prize money. The player even turned up to the WPT Championship that year, using the “winning” ticket he had earned at the WPT Spain Championship. Players were incensed at his presence there. Many confronted him, including Daniel Negreanu, who tweeted:

“Ali Tekimtamgac who was caught cheating in Partouche is in #WPTChamp. I called him out, and floor told ME I can’t do that! When will we learn… Bellagio/WPT should absolutely not allow this person in the event. He was caught red-handed cheating and should be banned. This is absurd.”

Others who called him out were physically threatened, as Negreanu later tweeted: “The cheater just threatened Scott Siever, the floor was alerted and won’t do anything about it. Physical threat, he should call the cops.”

Now, as the disgraced player begins a sentence behind bars, we’re not holding out much hope for his unresolved court-case against Partouche.