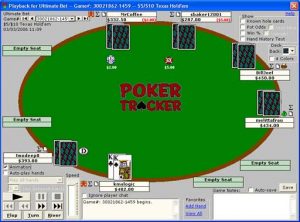 PokerTracker and Holdem Manager have announced an impending merger. The deal, which will create a monopoly in the tracking software market, will see the two former rivals pool their resources and intellectual property, as well as combining staff and management; however the two actual products will remain separate, and existing plans for the launch of the next generation of software, PokerTracker 5 and Holdem Manager 3, will not be affected.

The new company will continue work on the new Cloud platform, a new project that will see player databases stored in the Cloud, according to a PokerTracker press release. In the meantime, changes to player experience should be minimal; the merger is more about “working to improve efficiencies and to explore opportunities to share code and technologies when appropriate.”

“Our customers are better positioned today and into the future because of the combined experience of the two teams in developing and supporting software for online poker players,” said the merger announcement, adding that an “increased ability to reinvest in the innovation and improvements in the most popular online poker software brands in the world today,” will also benefit customers.

Poker tracking software like Holdem Manager and PokerTracker import and parse hand histories, with the resulting statistics stored in a database, enabling players to analyze their own play or that of their opponents via a Heads-up Display (HUD). Stats are available on all aspects of the game, from a players’ 3-bet ratio to the amount of times he folds to a donk-bet on the turn. By comparing stats against thousands of winning players, and understanding those stats correctly, customers can better assess their leaks and, theoretically at least,  improve their play.

PokerTracker was first into the market, launching in 2001, and soon became the market-leading software, until Holdem Manager appeared in 2007 to challenge for the top spot. The two products, and their use of statistical analysis, have revolutionized the game, allowing players to reach new heights of expertise and changing the landscape of online poker.

But they’re not without their critics. With the help of poker tracking software, the skill gap between the serious and recreational players has never been greater, which means the recreational players, poker’s bottom line, are being swallowed up at a greater rate. Fewer and fewer new players are coming into the game, and those that do are not sticking around, perhaps because of a perception (right or wrong) that they’re not getting a “fair” game because of the prevalence of tracking software. Online poker, say the naysayers, is cannibalizing itself.

Over the years the rivalry between the two products has driven the rapid technological innovation of tracking software, as each tried to steal a march on its opponent. Now, with the competition removed and a monopoly established, we wonder whether the innovation we’ve seen over the past ten years will begin to slow, or if it will lead to a fusion of ideas and potentially some exciting new developments.

Store my stuff in the cloud? NO WAY! And I withdraw any permission to store in the cloud any info about me in any hand I am involved with.

On a much lesser note, losing the competition will not be a good thing.

lol, i have bought both products. Can i get a refund after the merger? 🙂