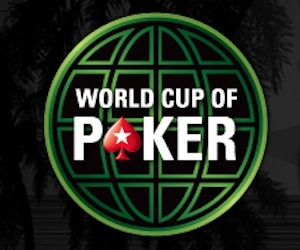 The tenth annual PokerStars World Cup of Poker is underway online, this time with an all-inclusive play money format. (Image:pokerstarsblog.com).

The PokerStars World Cup of Poker X (WCP) recently kicked off in a format that allows players from 96 countries to compete for bragging rights and over $500 million in chips…if not for real money. For the first time since its inception, the WCP heads-up No Limit Holdem event is being played entirely online, and in the play money format, which means that US players can now participate and attempt to unseat last year’s defending champions from Russia.

Competing countries were divided across eight groups, and the battle began on November 22nd with individual players dropping just 1k in play money to represent their homelands in the games. After the first weekend of play, several larger countries including Russia, the US, Canada, and Australia remain in the hunt, while surprising upsets came for the UK, Brazil, the Netherlands, and all Scandinavian countries.

Although PokerStars is sweetening the pot with millions in play money along the way, the buyins do increase substantially as the games progress, with entry to the December 20th final set at a 100k buyin per player. Entrants can purchase play money chips from PokerStars at a minimum of $1.99 for a 350k stack.

Why A World Cup of Play Money?

PokerStars has offered play money chips for purchase during the last two years as the company began to move into the social gaming space to expand revenue. While the new play-money format of WCP now makes it a global online poker event, one has to wonder if there is also a New Jersey connection to the move, as recently suggested by PokerFuse.

Since 2009, the WCP finals have been played during the PokerStars Caribbean Adventure (PCA) at Atlantis Resort and Casino in the Bahamas, with a $200,000 prize pool up for grabs. Now imagine what a splash the WCP event could have made in Atlantic City, New Jersey this fall, if a license to operate in the regulated market had been granted to PokerStars back in October, as NJ Senator Raymond Lesniak (D) optimistically foretold via Twitter.

If an international player liquidity agreement had followed the supposed licensing, US players could have represented their country in a real-money PokerStars WCP again, in addition to playing cash games and regular tourneys. But such visions have been postponed for future holiday wish-lists, and their fruition will hopefully make for a Happy New Year at some point in 2015.

Election politics and Sheldon Adelson’s influence over Governor Chris Christie have been cited by Lesniak as roadblocks to progress in the PokerStars licensing matter.

The Games Must Go On

While politicians haggle over PokerStars’ return to the US market, the World Cup of Poker will play online for friendly stakes until a winning country claims victory on December 20th. Players can find the tourneys in the PokerStars client by going to Play Money tournaments and searching for “WCP”. The United States Vs Canada heads-up shootout tournament in the WCP Round of 16 is scheduled to begin on November 29th starting at 6pm ET.