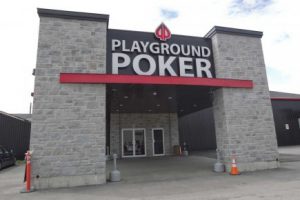 PokerStars has pulled their branding from the Montreal Festival which takes place this month at the Playground Poker Club. (Image: lapress.ca)

PokerStars made a surprising move this week after the popular online poker room pulled support from the Montreal Festival. As is common with many live or online tournaments and events, a major sponsor is often attached to increase recognition and visibility to players.

In the case of PokerStars, breaking away from the Montreal Festival so close to the event’s beginning has generated a lot of questions and confusion as well as a potential hit on the number of attendees at the event.

The absence of PokerStars’ branding was first noticed when a link to the Montreal Festival‘s information page was noticeably absent from the PokerStars website. No information or explanation was being provided by PokerStars either. At the same time, any references to PokerStars were being removed from the event’s website including banners and additional branding.

The event’s website now reflects its appearance at the Playground Poker Club, giving the event its new name of the Playground Poker Club Montreal Festival. PokerStars was relatively tight-lipped on the reasoning behind the move towards the media and issued a statement. In summary, they posted that due to circumstances that weren’t expected, they would not participate in the festival, but that the tournament would continue as planned. They finished by stating they would honor any previous commitment to players and satellite winners. Two spokespeople for the Playground Poker Club repeated the same sentiment without further details to multiple press outlets when asked.

With PokerStars withdrawing its branding, it should come as no surprise that satellite events being held on PokerStars for the Montreal Festival are no longer being offered. Yet even with this dramatic change, most of the events throughout the festival are still being maintained as PokerStars Head of Communications Lee Jones explained.

Taking place from August 22 to September 3 in Kahnawake, Quebec, the Montreal Festival has 16 events. The highlight is definitely the $1,100 Main Event which guarantees a prize pool of $1 million. Kicking off the festival will be a $150 buy-in tournament with four starting flights and a $100,000 prize pool guarantee. Scheduling for the Festival also remains intact, despite the change in branding.

The official “due to unforeseen circumstances” announcement from multiple parties is certainly raising eyebrows with players. Many poker outlets planned on doing live coverage of the Montreal Festival. Now, it appears that some or even most of the outlets planning to cover the event will not attend.

PokerStars’ decision to drop its branding also fell upon the same day Amaya Gaming announced it would be purchasing the Oldford Group Limited. Oldford Group is the parent company of Rational Group Ltd., the owner and operator of PokerStars and Full Tilt Poker. Based in Montreal, Amaya Gaming purchased all of the Oldford Group’s shares for $4.9 billion in a deal that will create the world’s largest publicly traded online gambling company.

Players may wonder if PokerStars now being Canadian-owned will force the company to stop operating in the country’s grey market. Aside from the official statement by Jones, no other details have been given to assuage any doubt. Regardless, the Montreal Festival will continue, even if it is lacking PokerStars’ significant branding.