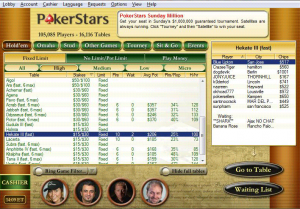 The familiar PokerStars lobby and a range of tournaments could be available in New Jersey in a matter of weeks. (Image: PokerStars.com)

PokerStars’ return to New Jersey may not be official yet, but with everyone from industry insiders to local politicians saying it will come soon, it certainly feels like a done deal.

They’ve even held meetings with former PokerStars players in the state in an attempt to get a feel for what poker players want, presumably with the goal of launching on the right foot. Now, at least one person who went to one of these meetings is reporting that the company even has a tentative tournament schedule ready to go if and when they come back to the state.

According to TwoPlusTwo and posted by Dan Burns, who said he attended the PokerStars meeting in Jersey City last week, officials from the online poker company talked to the approximately 25 players in attendance about the kinds of cash games and tournaments they’d like to see in an Internet poker room.

“They were trying to get a feel for what NJ players prefer,” he wrote. “Turbos? Deep stacks? Gimmicky tournaments like Fifty50s and knockouts/bounties? Six handed or nine handed cash games? What should the min. and max buy ins be for cash?”

Dan Burns’ trip report also included information on what he said was a proposed tournament schedule.

“There is some variety, but no real sexy guarantees during the week,” he wrote. “On Sunday they will have a $50 Sunday Warm Up freezeout with a 10K guarantee and a $200 Sunday with a $50K guarantee.”

If accurate, those tournaments would be fairly ambitious compared to what is currently offered in the New Jersey market. The Borgata/partypoker site also offers a $200 tournament on Sunday that has a $50,000 guarantee, meaning PokerStars would be trying to match that right off the bat. This could be a sign that the site expects to immediately jump into the top tier of poker sites in the state, a real possibility given their brand recognition.

Burns also said that the timetable for the PokerStars return was also discussed at the meeting.

“There’s no definite information yet, but they say depending on how smoothly their licensing process goes, cards can be in the air anywhere from six weeks to six months from now,” he wrote.

That aligns with recent comments by State Senator Ray Lesniak (D-20th District), who has said that an announcement about PokerStars in New Jersey could come in a matter of weeks rather than months. No firm date for a return (or a decision from state regulators) has been announced to this point.

One of the major issues in New Jersey’s online poker network has been the geolocation technology in use, which has sometimes kept players in the state from accessing online gambling sites. While Dan Burns said the topic came up at the meeting, PokerStars said they are limited in what they can do about it.

“They said the NJ law forces them to use one of the two or three geolocation technology providers specified, so they really can’t do a lot that is different from the other sites in that regard,” he wrote. “That being said, they are doing everything they can within that framework to be the best in the state at it.”

Why just NJ. What about the rest of the states in the u.s.a. I’m from Texas n I want to play.