PokerStars TCOOP Investigation Concludes No Proof of Bot Use 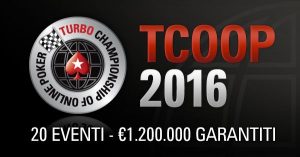 An investigation into a recent PokerStars TCOOP event concluded there was no proof of any player using a bot. (Image: Assopoker.com)

A recent PokerStars TCOOP event drew more attention than most $82 buy-in poker tournaments. The eventual winner of the tournament, along with other poker players, accused the Russian runner-up of being a “bot” and not a real human.

But, after a short investigation, PokerStars has concluded there was no proof of shady business taking place, and that all players were legit. The outcome of the investigation likely won’t sit well with many players nonetheless, and comes on the heels of PokerStars implementing new changes to its software to prevent the use of bots.

Suspicions of cheating surfaced when two players in TCOOP event #8 were heads-up. In tournaments such as these, players are given the option to chop, meaning they split up the prize pool without playing out the remainder of the match.

Both players must agree to the chop or play will then resume. The first player, “Luckboxstami,” proposed the chop, but didn’t initially receive a response from his opponent, the Russian”IvanHaldi.”

A moderator from PokerStars stepped in, informing the players of a potential split that would pay each $40,000. “HostMatthieM” initiated contact via the chat function on PokerStars, asking for each player to confirm acceptance of the agreement.

Luckboxstami commented, saying that he agreed, but IvanHaldi didn’t respond. The moderator then attempted to communicate in Russian, since that is the assumed language spoken by IvanHaldi. Still, no response.

The next move for the moderator was to attempt to communicate with IvanHaldi through private chat and telephone. Again, there was no response.

Luckboxstami became suspicious of the activity and voiced his opinion in the chat box that he wasn’t convinced his opponent was human. The moderator informed the player that the PokerStars security team would investigate the matter to ensure IvanHaldi wasn’t using a bot.

Upon coming to the realization that IvanHaldi was unreachable, the deal was off and play was set to resume. The moderator said in the chat that, “only human players can tick the deal option, as far as I know.”

Once play resumed, IvanHaldi’s account then instantly reacted, which seemed strange. Six hands later, Luckboxstami finished off IvanHaldi, winning a 60/40 hand where his opponent made what most consider a strange call pre-flop with a weak hand.

IvanHaldi’s decision to call off all his chips with a 9-6 suited was just another reason to question if a bot had been used.

With the odd activity from IvanHaldi’s account, PokerStars launched a quick investigation that determined no bot had been used.

“As is our routine practice, PokerStars has investigated this account for possible use of prohibited software and we are confident that the tournament was not played by a bot, and that the gameplay decisions were made by a human being,” Michael Josem, head of PokerStars public relations, said in a statement.

In a press release, PokerStars admitted the investigation isn’t conclusive proof a bot wasn’t used during the TCOOP event, nor do they have an explanation for IvanHaldi’s odd behavior. But there isn’t proof any funny business took place either.

But if someone was running a bot, dont you think they would be monitoring it? Especially if it made such a big final table? C’mon…..

There are defiantly bots on poker stars. I played a Russian person heads up for $50 and the way they win is to make a bet at the last second of the timer. So if you have 45 seconds to make a bet that means you have to sit there and wait every hand 45 seconds. Most people just quit and the bot makes $50. Take that times 100. I submitted a complaint to pokerstats and was promised investigation, but never heard anything back. This was before they banned online poker in the USA.