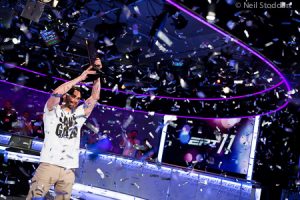 PokerStars plans to refuse entry to poker players displaying political statements on their clothing in future live tournaments that are taped for television. The new policy is a result of complaints on social media regarding Olivier Busquet and Daniel Colman, who wore controversial T-shirts as they finished first and second in the EPT Super High Roller event in Barcelona.

Colman finished second in the tournament and wore a T-shirt that stated, “Free Palestine,” while Busquet won first place wearing a T-shirt that read, “Save Gaza” in large letters. The picture of Busquet holding his trophy displayed the shirt.

As social media took to Twitter to complain and reach out to PokerStars for a statement, the company’s Head of Corporate Communications for Rational Group, Eric Hollreiser, replied: “In retrospect it was a mistake to allow them entry,” referring to Busquet and Colman. “Our tournaments are designed to promote poker and poker competition and not as a platform for political statements. Players have many channels to express their views on world politics, but our tournaments are not an appropriate place. We will refuse entry to any player displaying political statements of any kind.”

The most vocal of the complaints came from Robbie Strazynski of Cardplayer Lifestyle, who took to his blog to explain that he feels political statements should be banned at the poker tables, especially ones that are so publicly relayed to a worldwide audience. He defended his stance against the T-shirts worn by Busquet and Colman, noting that he would feel the same if anyone wore pro-Israel shirts that made a political statement.

Nolan Dalla followed up with a blog post of his own, saying that political censorship has no place in poker. His view was that the shirts said nothing vulgar or profane, and PokerStars’ reaction to the situation was “terribly misguided” and blocks players’ freedom of expression. He went further to say that poker players must be political in order to prevent laws like the UIGEA in the United States and other regulations that hurt poker, and their ability to express political views at the poker table is an integral part of that.

Team PokerStars Pro Victoria Coren-Mitchell took to her personal blog to express her own view. She doesn’t “love” the new PokerStars rule, but believes the company was put in a tough position when the social media storm ensued and put PokerStars on the spot. Overall, she believes that poker is a social game, and players should be able to express themselves verbally and through their choice of clothing. She called it an example of a “common and ancient danger” of “the failure to distinguish between thinking somebody shouldn’t do something and that they shouldn’t be allowed to do something.”

Fellow Team Pro Daniel Negreanu took to his blog to mostly agree with Coren-Mitchell. He noted that PokerStars was put in a tricky situation and had to respond to the complaints. He felt that “Save Gaza” was too general a message to be viewed as offensive, but the “Free Palestine” shirt contained a “loaded political message.”

Busquet explained a bit further on Twitter that he respects PokerStars’ ruling, but that he didn’t intend to make a “real political statement” with the shirt or offend anyone. “It was to show support and express solidarity 4 the innocent who are disproportionally Palestinian… a fact everyone must acknowledge no matter what ‘side’ you’re on.” He continued by saying that he asked PokerStars if he could wear a shirt referencing the police shooting in Ferguson, Missouri, with a shirt that reads, “Hands up, guns down,” and he was told that PokerStars would get back to him with an answer.

I think the founders of PS are jewish? Don’t hope it was an hidden personal thing.

I totally agree that with that war , way 2 much innocent people get victim.

I don’t hope this got deleted, cause it is really my opinion, look at WW2 what awful things happened to Jewish people with all the camps etc?

And what are they doing themselves now with the people in Gaza?

Looks like history repeats itself only the ones that were victim once are imo doing something which is really horrible.