The PokerStars Sunday Million, now a decade old, came to its conclusion in the early hours of Monday morning and, when the betting was finally over, it was Canada’s a.urli who banked the $970,000 top prize. 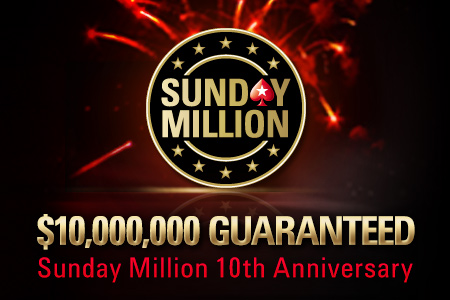 To celebrate the tenth anniversary of its flagship event, PokerStars increased its guaranteed prize tenfold to $10 million.

To help boost the numbers and avoid an overlay in the $215 event, PokerStars put on a plethora of additional satellites (costing $0.55+) and that resulted in 45,353 unique entrants joining the action with 9,706 of those exercising their re-entry option to take the total number of buy-ins to 55,059.

By the time the final table rolled around, just nine players stood on the cusp of a $1 million+ payday, but when four players were left, a deal was made. With the momentum on his side, a.urli was able to command the largest share of the prizepool and eventually accepted $870,000 before play resumed.

With $100,000 left to play for, canario508 from Argentina was the first to hit the rail before prophetdream (South Korea) and mladdenova62 (Bulgaria) followed suit to leave a.urli as the winner at the latest landmark event at PokerStars.

As the community reflected on another seminal moment in the history of online poker, things took a slightly less positive turn on Monday after PokerStars announced a series of rake increases that will come into effect as soon as next week, on March 28.

MTT hyper-turbo rake will be increased to 5 percent

Cap and percentage of rake will be increased in some no limit and pot limit ring games, mainly heads-up. Some rake caps will be lowered. Limit games will not be affected.

Although the community hasn’t yet had time to react to the news, it’s unlikely the increases will be welcomed with any great enthusiasm, as changes of this nature rarely are.

However, in a bid to tackle any negative comments before they’re made, PokerStars has released details of how its ring game rake stacks up to its competitors.