PokerStars Sportsbook Offers Odds on Most Expensive Online Tourney Ever 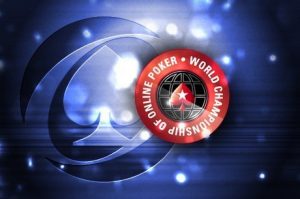 PokerStars’ Super High Rollers WCOOP event will be the first online poker tournament with its own betting market. (Image: AP)

The PokerStars Sportsbook will be taking bets on the winner of its forthcoming WCOOP Super High Rollers event, the first time that an operator has offered a book on the outcome of an online poker tournament.

The $51,000 buy-in Super High Rollers event, which kicks off this Sunday, 20th September, is set to be the priciest buy-in of any online tournament ever.

PokerStars is currently offering odds on 38 players, with Daniel Negreanu and Jason Mercier leading the pack, each as 12/1 (+1200) favorites.

Customers are able to place bets to win, or each way at the PokerStars sportsbook is available to players on the .com, .eu, and .uk sites within certain jurisdictions.

“We’re excited to offer customers the opportunity to bet on online poker tournaments for the first time and the WCOOP $51,000 Super High Roller event is the perfect place to start,” said Stephen Fisk, managing director of sports betting at PokerStars.

“It’s already the most talked about online tournament of the year, and with the added spice that having a bet on it brings, fans and players from around the world can rail their favourite player and win money even if they don’t have a spare $51k lying around.”

Amaya rolled out its sports book on April 1st this year, four months after it introduced casino gaming to its product offering.

The move was divisive, with many players feeling that Amaya was diluting the PokerStars product and turning its back on poker in favor of profit.

But what about gambling on poker? Well, long odds and tiny edges between players make it a bit of a lottery.

Plus, it’s impossible to know until the last minute how many runners the tournament will have, a fact which greatly affects each player’s odds of winning. There’s also a fat house edge.

But the Super High Rollers event is unlikely to get very many runners, because it represents bad value to any player but the very best in the world, and, as Fisk enthuses, the betting aspect certainly makes rail-birding more fun.

So, it may an unenticing prospect for the truly savvy gambler, but we’re not one of those, so we lumped $20 to win on Jason Mercier to win. That’s just how we roll…

lol was thinking same and if they would seem to lose millions, cause the sportsbettors are right with their betting and that player seems to win, they are Always able to “rig’ the deals