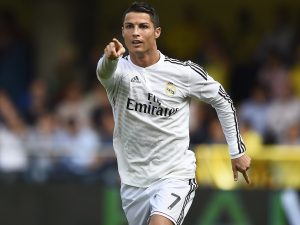 Cristiano Ronaldo is part of the Dream Team promotion and marketing campaign currently underway at PokerStars. (Image: The Independent)

PokerStars is less than a month into what has been called the largest advertising campaign in the history of the brand, one that is using two of soccer’s biggest stars to promote the online poker room worldwide.

And while it’s certainly too early to say whether the big marketing layout has paid off for the company, officials at Amaya have to be happy with the results they are seeing so far.

According to traffic numbers from PokerScout and analysis by Poker Industry Pro, PokerStars has seen a noticeable increase in traffic since the “Dream Team Collection” campaign began.

PokerScout currently shows that the site is averaging 15,500 cash game players at any given time over the past week, an increase of nearly nine percent compared to before the campaign began.

Those numbers refer to the global PokerStars site, but the numbers at some of the segregated national sites operated by the online poker giant have improved even more.

In Spain, traffic is up 20 percent this month; Italy has seen a nearly 30 percent gain, making it the largest single-nation poker site in the world.

In France, the ad campaign only truly kicked into gear about a week ago, making it too early to be certain what kind of impact the marketing effort is having there.

However, the early signs are once again promising: already, cash game traffic is up nearly 10 percent on PokerStars.fr.

What do these markets all have in common? For one, they’re all soccer-mad nations, and those are exactly the kinds of places were you would expect to see this particular marketing effort to pay off.

In early August, PokerStars began showing off their latest set of advertisements, starring professional soccer superstars Cristiano Ronaldo and Neymar Jr., both of whom signed sponsorship deals with the poker site in May.

The ad campaign kicked off on Facebook, where fans of the two players were able see previews of commercials featuring the legends.

That may have been the perfect way to capitalize on the tremendous popularity of each player. Ronaldo is the most popular celebrity on Facebook, having more than 104 million fans following his page, while Neymar isn’t exactly anonymous himself, boasting 53 million fans.

The advertising campaign has been tied to a promotional offering in which players try to unlock segments of portraits belonging to Ronaldo, Neymar, and the “original” Ronaldo Nazario.

Each time one of these portrait pieces is unlocked, players are also rewarded with prizes. The potential rewards range from a ticket to a tournament with $20,000 added to the prize pool to cash rewards and potentially a ticket to a $1 million shootout.

While the promotion seems to be a success so far, that doesn’t mean that there haven’t been a few hiccups along the way.

Most notably, laws regulating how young people can be used in gambling promotions in the UK forced PokerStars to remove Neymar Jr. (who is just 23) from the Dream Team promotion, replacing him with a legend of the poker world: Daniel Negreanu.

I am glad PokerStars is doing well . I would be really glad if US players had access to that market again !