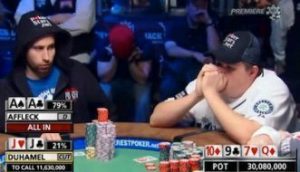 PokerStars adds an equity percentage display to the software, like the kind used to generate excitement in televised gameplay. (Image:pocketfives.com)

PokerStars has added an equity display to its software versions 6 and 7, in which the percentage-to-win of each all-in player is shown next to their hole cards. The feature replicates a similar display seen on televised poker broadcasts that adds excitement to the game, where viewers see the fates of all-in players change with each street dealt, while the dealer pauses for effect.

The scene plays out much quicker online of course, but similarly shows the odds of each hand to win an all-in confrontation. It is a feature already available in other clients such as Bovada, iPoker, and PKR, and while considered an enhancement to some, it has drawn criticism from others at the Two Plus Two forums recently.

We Don’t Need No Education

A few online poker “regs” complained that the added data might teach new or recreational players useful information about the game, which could make them less exploitable\profitable to play against.

“Some of you guys are hilarious. If your edge is so thin that you think fish knowing their all in percentage could hurt you, you obviously need to work on your game.”

Due to poker’s inherent complexity, it does seem doubtful that the new all-in percentage display alone would give new players a significant edge, and certainly not over those adept at using data from one of the popular heads-up displays. Others think the equity display could make the game more appealing, as Two Plus Two member “zizek” added:

“I’m quite confident this actually appeals to recreational players for several reasons. It more closely simulates televised poker, it lets people selectively attribute their losses to bad luck (because they’re unaware of how much they’re losing without showdown), and the rare pure spew fish is unlikely to care either way. This actually squarely targets the most common type of losing player – the unaware fish who wildly overestimate their own ability.”

It’s Not a Feature. It’s a Bug

Still others have reported that the new equity display often miscalculates the odds, which makes it not entirely useful just yet. A number of players posted screenshots of all-in percentages that differ significantly from those produced by commonly-used equity calculators such as PokerStove and Equilab.

The discrepancies were noted by “PokerStars Keith” at 2+2, who wrote on December 16: “The algorithm has been refined and a fix should be deployed soon, but we don’t have an exact date.”

The new feature is enabled by default, but can be disabled in Gameplay settings.

Poker equity is the average amount a player can expect to win from the pot over the long term at a given point in a hand, expressed as a percentage. Equity is synonymous with the probability of winning before the next street is dealt (flop, turn, or river). In other words, if you are a 70 percent favorite to win a hand, then at that point you have 70 percent equity in the pot.

For more on how to use equity in poker, please read CardsChat’s article on poker equity.