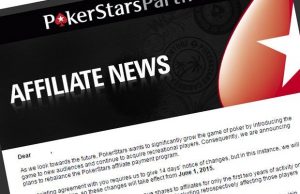 PokerStars is seeking to extricate itself from onerous revenue share deals so it can focus its marketing strategies on “growing poker,” but will it be at the cost of independent poker media? (Image: onlinepokerreport.com)

PokerStars has announced that from the beginning of June it will restrict the length of new and existing affiliate deals to two years, and that could spell bad news for online poker media.

Most poker media sites depend on affiliate revenue sharing deals; a form of marketing whereby the media site, or “affiliate,” receives a percentage of the rake generated by a player who it has recruited for an online poker site, sometimes for the “lifetime” of the player.

It has been a synergistic, mutually beneficial system that has helped to grow the online poker industry from the very early years, but, as PokerStars explained this week, the industry has changed.

More recreational players need to be brought to the market, and these are no longer being recruited through the traditional affiliate channels.

Many existing affiliate deals have become an expensive liability to operators, because players that generate the most rake tend to be established players rather than newcomers. These players, therefore, zap marketing budgets that could be spent on attracting new ones.

“Over the last few years, the global online poker industry has changed significantly, and we must change with it,” announced PokerStars, in a recent message to its affiliates.

The affiliate rev share model emerged at a time when hundreds of new operators were vying for a share of the market, and affiliate referrals were hugely valuable to operators, but that market is now dominated by one all-powerful operator, which needs to change its marketing focus towards mainstream media.

The lack of competition in the online poker space has had a dramatic effect on poker print magazines recently because they simply don’t have enough advertisers.

A handful have folded in just the last year, such as Bluff, WPT Magazine and, in the UK, Poker Player, some of which have opted to reinvent themselves as news websites, and now rely on largely affiliate marketing to survive.

But in the new online poker space, there simply may not be enough revenue to sustain these sites, especially if other operators follow PokerStars’ lead, which would seem likely.

PokerStars needs to attract new recreational players, of course, but an independent poker media may have to be sacrificed in the process.

This may not benefit everyone who loves poker.