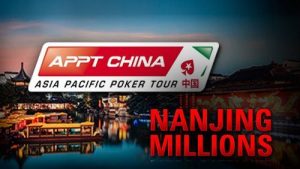 PokerStars’ Nanjing Millions is once again teaming up with the Asia Pacific Poker Tour (APPT) for an event in China, signaling the continued growth of the game in the mainland. (Image: calvinayre.com)

The 2015 Nanjing Millions, scheduled for April 14th to 19th, will bring PokerStars back to the People’s Republic of China for the third time since it entered the market last July.

The six-day tournament will be held at the Jiangsu Wutaishan Sports Center, a 62,000-seat venue constructed in 1952 that is one of the oldest stadiums in the country.

An official Asia Pacific Poker Tour (APPT) event, the government’s backing of selected poker festivals has led to a rise in the game’s popularity among residents.

“The growth of poker in China has been tremendous and we are committed to support this sport throughout the region. Nanjing is a key location that allows players from all over the country to participate. The previous two Beijing events last year were very successful and we are proud to be a part of this government-supported event,” APPT President Danny McDonagh said. 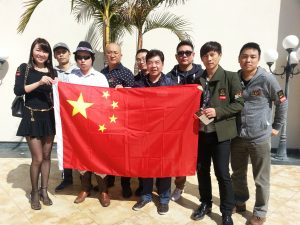 Seen here at the Commerce Casino for the LA Poker Classic, these Chinese poker players are making their love for the game clear, and they are not alone. (Image: globalpokerindex.com)

July’s Beijing Millions was PokerStars’ first event in China, and it was an overwhelming success. A whopping 2,732 players turned out, making it the largest poker tournament ever held outside of the US.

“We always believed that this would be a successful event, but this result greatly exceeded our wildest expectations,” McDonagh said at the time.

The Chinese government recognized the overall achievement of the event, and welcomed APPT and PokerStars to return in December. The Beijing Cup focused on the higher rollers, increasing the buy-in to ¥8,800 ($1,405).

This time, 346 entered the event, resulting in a pool of $451,689 and a winning cash of $101,683 for Yang Zhang, who also placed second at the Millions. No one in China is likely more excited than Zhang to learn about another event coming to his homeland.

The main event will attract the most players, and will borrow a page out of the Beijing Millions record-setting format by using the same ¥3,000 ($480) buy-in level. With an Olympic-sized stadium and centralized location in regards to Shanghai, Beijing, and Tianjin, the Nanjing Millions might just break another attendance record.

Have a bunch of frequent flyer miles you’re looking to use up? PokerStars is offering a $55 Mega Satellite on Sunday, March 22, with 15 Nanjing Millions main event entries up for grabs. If qualifying for the $480 main event on a $55 bet isn’t quite enticing enough to travel across the world, PokerStars will also run two nightly feeder satellites for just $1.10, with more than $5,000 in free Mega Satellite tickets in the prize pool.

These daily turbos take place at 9 and 10 PM EST and are running now through March 22nd.

Just another industry where America is falling behind China. So sad for us, but good on the Chinese! That’s a huge market right there.