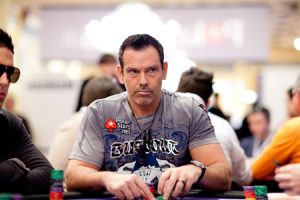 Daniel Negreanu and a host of pros will ante-up in New Jersey to remember Chad Brown. (Image: pokerstars.com)

Chad Brown, a former PokerStars pro who lost his battle with cancer back in 2014, will be remembered in New Jersey in November.

With PokerStars preparing to host its first ever live festival in the Garden State, the organizers have announced that the third Chad Brown Memorial Charity Poker Tournament will be part of the schedule.

Brown Bluffing Until the End

Brown was known to his peers as one of the most affable pros on the circuit and, in between his acting roles and commentary gigs, he managed to win $3.6 million in tournament winnings.

Unfortunately, after a three-year battle against a rare form of cancer called liposarcoma, Brown lost his life in 2014.

Like a true poker pro, Brown was playing poker right up until the end and even managed to finish 26th at the 2014 WPT Borgata Winter Poker Open.

Set to get underway two days into the first ever PokerStars Festival New Jersey, the $200 tournament will be hosted by Daniel Negreanu.

For those that do turnout to honor Brown’s memory, PokerStars has put together an impressive selection of prizes. The overall winner will take home a $5,000 ticket to the PokerStars Championship Bahamas Main Event, while the runner-ups will bag everything from a $3,200 Players Poker Championship Aruba Main Event Package to a $228 subscription to LearnWPT.com.

In 2015, the second annual memorial tournament took place inside Planet Hollywood and was eventually won by Maria Ho. After generating 141 entries and a prizepool worth $14,100 (50 percent of which went to charity), Ho used her six rebuys to build a stack capable of crushing a tough final table.

After watching Tony Hachem and Vanessa Selbst fall by the wayside, Ho was able to overcome Kevin O’Donnell to claim the $2,766 top prize and the Chad Brown Memorial Trophy.

This year the organizers are hoping to eclipse 2015’s total number of entrants and, if PokerStars’ inaugural New Jersey festival is as popular as many expect it to be, beating that total is entirely possible.