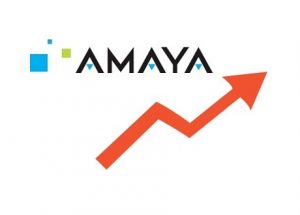 PokerStars may not be a legal entity yet in the US, but the online mega-site is earning its keep very nicely elsewhere, thank you very much.

Parent company Amaya Inc. has reported $688 million in revenue for the fourth quarter of 2014, a whopping 371 percent increase, in its first financial report since its $4.9 billion leveraged purchase of PokerStars and other Rational Group assets.

The gaming giant also announced that an integrated PokerStars sports betting platform is just around the corner.

Amaya chief David Baazov said that sports betting would be rolled out “in certain markets” in a matter of days with “an expansion across the network to take place through the first half of 2015.”

Amaya launched casino games on the platform towards the end of last year, which, Baazov said, has produced revenue yields and cross-sell rates that have succeeded expectations. 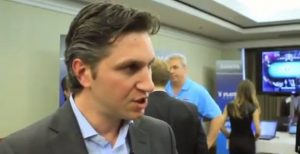 The vast majority of Amaya’s record revenue, some 80 percent, now comes from its newly acquired B2C (business to consumer) operations, and most of that is from PokerStars. And the company will look to continue that growth through expansion and marketing efforts in key markets in Europe and Asia, said Baazov.

“PokerStars intends to continue to grow its core poker business through geographic expansion, new and innovative marketing campaigns, including exciting global celebrity endorsements and promotions, and continued innovation in games and technology to improve the consumer experience and attract new players to the game and our other offerings,” he said.

Amaya now plans to offload some of its B2B assets in order to concentrate on its core division offerings. On Monday, the company confirmed that it had agreed to sell slot manufacturer Cadillac Jack to Apollo Capital Management for CAD $476 million.

“We completed our transformation into an online consumer technology leader in 2014 with the successful integration of PokerStars and Full Tilt into Amaya,” said Baazov. “As our B2C business is Amaya’s core growth platform, we have initiated a process to identify opportunities to divest our B2B assets, with the aim of facilitating their future growth and maximizing value for Amaya shareholders.”

On the “New Jersey question,” meanwhile, Baazov said he expected the company to enter the market sometime in the third quarter. This is the first time anyone at Amaya has spoken publicly about the likelihood of PokerStars returning to the US, let alone set out a possible timeframe. 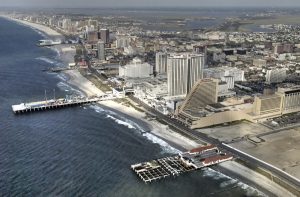 The Atlantic City online gaming market should be close on the horizon at last for Amaya, after many political battles. (Image: en.wikipedia.org)

Finally, Baazov announced that Amaya, which has been listed on the Toronto Stock Exchange since 2013, had applied to join the NASDAQ, a reflection of the global gaming giant that the company has become in such a short space of time.

“…To further our position as a leading global, online consumer technology company, we recently applied to list our common shares on the Nasdaq Global Select Market, and currently anticipate providing an update on the status of such application in the near future,” said Baazov.

Shares climbed 4.17 percent to $31.47 per share in Toronto in early trading following the announcement on Tuesday morning.