PokerStars New Jersey first launched just over a week ago, but is already dominating poker site traffic in the Garden State. Its two major competitors, WSOP.com and 888poker, may already be feeling the effects of competing against the biggest brand in online poker. 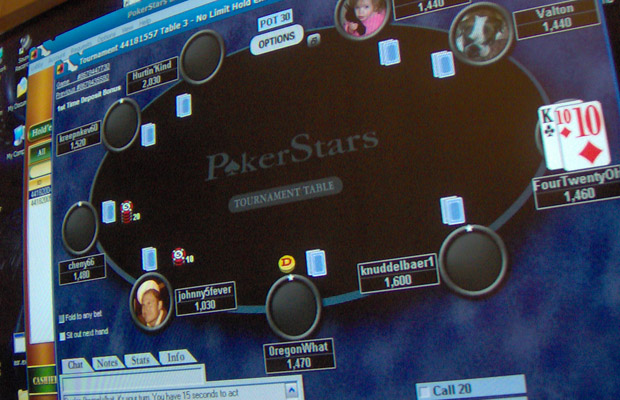 PokerStars New Jersey has already surpassed 888 and WSOP.com atop the poker traffic charts in the Garden State.  (Image:  gutshotmagazine.com)

After just one day in New Jersey, PokerStars took over the state’s lead in cash game traffic. That occurred on March 21. But the Internet poker giant didn’t stop there. It now tops the charts for overall traffic, which is quite an accomplishment in just a little over a week’s time.

There may be a number of reasons leading to that early success, including plenty of hype leading up to the launch. PokerStars was a popular Internet site in America prior to Black Friday in 2011. Many have waited in anticipation for its return ever since.

It hasn’t taken long for PokerStars to make an impact in the Garden State. Average cash game traffic in New Jersey is up 20 percent since March 15, which was just a day before PokerStars opened for business to a select group of players, and five days before its full launch.

It remains to be seen if the poker industry in New Jersey can sustain, or improve upon, this early success. Will the novelty of PokerStars coming back to America wear off? That question will be answered down the road.

Competitors Likely to Push Back

Like any industry, a quality business isn’t just going to sit back and let its competitor scoop up all the customers. So it stands to reason that WSOP NJ, partypoker/Borgata, and 888 will all, in some way, respond to PokerStars’ arrival.

888 has already moved its rewards program towards a more recreational player-friendly model, which launched, perhaps not coincidentally, on March 28. Likely there will be more moves yet to come from both WSOP and 888 to lure and keep players on their respective sites.

Just as PokerStars New Jersey was soaring this week, Amaya’s head honcho David Baazov was taking more of a nosedive. Amaya, of course, owns Rational Group, the parent company of PokerStars and Full Tilt, so the timing of it all couldn’t be more ironic.

Baazov is taking an indefinite, paid, and supposedly voluntary leave of absence. Baazov has been charged by the Quebec regulatory arm AMF of influencing or attempting to influence the market price of the securities of Amaya and communicating privileged information.

Baazov’s tarnished reputation hasn’t, thus far, had the slightest impact on traffic on PokerStars, either worldwide or in New Jersey. But the recent publicity from his alleged shady dealings still comes at an inopportune time, as PokerStars re-enters the United States and hopes to open up shop in additional states in the near future.

Baazov faces possible fines and less likely jail time, but no trial has been set and the CEO adamantly maintains his innocence. And while the business side of the industry may be reeling from the latest insider trading allegations, it seems that from a player standpoint, the scandal is barely a blip on the radar.