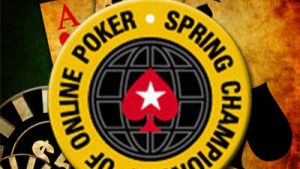 PokerStars New Jersey has been a hit since launching late last month. The biggest brand in online poker will be hosting a Spring Championship of Online Poker in the Garden State May 15-29.

NJSCOOP will be a spin-off of the global SCOOP series which has been one of the most popular online poker events for years. The New Jersey edition will feature $1.1 million in guaranteed prize pool money in 54 tournaments over the course of 15 days.

Satellite qualifiers into NJSCOOP events are already taking place on PokerStars New Jersey for as low as $1. Chris Moneymaker, the 2003 World Series of Poker Main Event champ knows a thing or two about winning satellite tournaments. Being a Team PokerStars Pro member, he also is quite familiar with the annual SCOOP series.

“The global PokerStars Spring Championship of Online Poker (SCOOP) is one of the must-play poker events of the year,” Moneymaker said. “It’s awesome that it’s coming to New Jersey so that players in the region can experience the exciting tournament structures and the thrill that comes with chasing a major tournament title and big prize money. I can’t wait to play in the first NJSCOOP and I plan to stream most of my play live on Twitch. I would love to win a title in its debut year.”

2016 will be the debut year for NJSCOOP, but the global poker series has been around since 2009. It has quickly become one of online poker’s biggest and most exciting poker events of each year.

PokerStars New Jersey on a Roll

NJSCOOP is likely to attract a large field because PokerStars New Jersey has been a rousing success. Already the top-ranked poker site in the Garden State, PokerStars is sure to see increased traffic during this 15-day series.