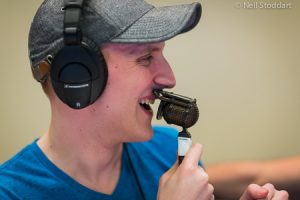 PokerStars New Jersey players are being offered a second chance to win a slice of $100,000 courtesy of a new Spin & Go challenge.

Following a successful $100,000 freeroll earlier this month, the operator is now giving players another way to join “romejones” in the winner’s enclosure.

The first freeroll of its kind in New Jersey saw 3,271 entrants compete for the lion’s share of the $100,000 prize pool.

When the chips had fallen and the final table had automatically closed a total of 1,170 players picked up some free cash while “romejones” banked $5,000.

Given the success of the first freeroll, PokerStars has just announced its second big money promotion.

Kicking off on April 25 and concluding with a final freeroll on May 15 at 18:00EST, the $100,000 Spin & Go Challenge is open to all New Jersey residents (physically located in the state) who complete one of the promotional challenges.

In general terms, a $100,000 isn’t a figure that usually gets the industry excited. However, in light of New Jersey’s relative size in comparison to other iGaming markets, a six-figure freeroll is a substantial investment on the part of PokerStars.

According to the latest traffic report by PokerScout.com, PokerStars New Jersey has a 24-hour cash game peak of 360 players making it the largest online poker site in the state.

To put this in context, PokerStars now controls approximately 45 percent of the Garden State’s poker market, despite launching just over four weeks ago and this promotion could help the site extend its lead even further.

PokerStars Exposure on the Up

To bolster its position within New Jersey, PokerStars is hosting the first ever Run It Up Resorts Rumble inside Atlantic City’s Resorts Casino Hotel.

Run It Up is the brainchild of Jason Somerville who hosts the instructional series of poker broadcasts live on Twitch. Parlaying the popularity of these streams into a tangible event, Somerville has gradually built up a tournament series for his community of followers.

The last Run It Up event took place in Reno at the Peppermill Hotel Casino. The $565 Main Event attracted 318 runners, including a selection of celebrity players such as UFC fighter TJ Dillashaw, and was eventually won by Nicholas Aguilera who took home $42,830 for his efforts.

Building on this momentum, PokerStars (Somerville’s sponsor) has helped organize Run It Up Resorts Rumble for New Jersey players.

The event will take place on May 14 and is designed to be the official “welcome party” for Garden State grinders.

As well as tournaments costing $10+, the event will be a chance for New Jersey players to meet some of the game’s top pros and mix with their peers.