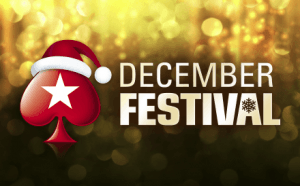 PokerStars cash game traffic has enjoyed a healthy spike during its December Festival with the $1,000,000 Milestone Hands promo. (Image:PokerStars.com).

The PokerStars Milestone Hands promotion is driving global cash game traffic to seasonal heights, with a $1,000,000 giveaway during its December Festival.

Global cash game traffic has risen by 6.5 percent since the promo began on December 1, while the North Star of the online poker world has seen a stellar 18 percent increase, as cash game grinders at every stake attempt to play their way into piles of extra holiday cash.

While last year’s milestone hand promo drove a whopping 20 percent increase in cash game traffic, this year’s numbers are slightly down by comparison, most likely due to the new Spin & Go format, a 3-max Hyper-Turbo Sit & Go. As part of the December Festival, players can try a new $5 Spin & Go for a chance to hit a separate $1 million jackpot.

Overall, PokerStars’ seven-day moving average for cash game traffic increased by 3,424 players through to December 9, according to PokerScout.com, for a volume not seen since last May during the last milestone hand promotion.

How the Promo Works

All other players at the table where the hand is dealt receive $50 per VPP accrued over the last 50 hands, plus another $50.

To increase the size of the prize in a milestone, PokerStars recommends that players loosen up their play to generate more VPPs (by playing more raked pots), play longer sessions, and play on more tables at once.

Almost all of the major poker sites have seen cash game traffic gains in December during promotions of their own. However, one notable exception to the seasonal boom is partypoker, which has been plagued by network connectivity issues since late October when the first events of its PokerFest series had to be cancelled.

In stark contrast to PokerStars’ 18 percent traffic increase since December 1, partypoker has seen a decrease of over 30 percent during the period, and was in 10th place at one point in the PokerScout cash game traffic reports. One player reported that a customer service rep blamed the issue on a Denial of Service attack, but whatever the cause, December has clearly not been “the most wonderful time of the year” for bwin.party and its customers.

Hopefully, partypoker can resolve the technical issues in time to get back on track for the rest of the seasonal surge. Until then, a lot of lucky players stand to gain from PokerStars’ December Festival, and plenty of additional holiday promotions in the market.