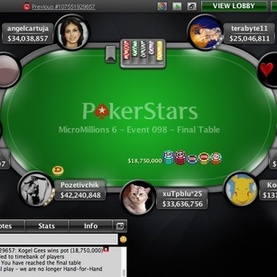 Details About the PokerStars MicroMillions

Players should think of the MicroMillions as similar to other tournament series, only with buy-ins that range from just a few cents to a few dollars. Huge massive tournament fields with super small tournament entry fees will be the norm for what is described as online poker’s premiere low-stakes tournament championship. To entice players from all stakes to participate, PokerStars is guaranteeing a whopping $5 million guaranteed prize pool across 100 events taking place from March 13-23, 2014.

In this seventh incarnation of the MicroMillions tournament promotion, players will be able to play in a wide variety of tournament types at various micro-stakes buy-in levels. In addition to the aforementioned $5 million guaranteed combined prize pool, there are also “Player of the Series” prizes available for players to strive towards. A fully detailed Leader Board page has already been posted by PokerStars that will track the top 100 players in the 100-event series.

“Player of the Series” Promotion

Within the MicroMillions seven-tournament series, players can win additional prizes by becoming one of the 100 anointed “Players of the Series,” as tracked on the Leader Board. Points are awarded across the entire 100-event series, each time a player makes the money in any scheduled tournament. The overall winner at the end will be crowned the “Player of the Series” and be awarded a whopping 26 entries into the Sunday Millions, which carries a combined buy-in value of $5,590. Players that finish in 2nd to 10th place on the official Leader Board receive five tickets each to the Sunday Millions, representing a value of $1,075 in tournament buy-ins. Those that finish in eleventh to one-hundredth place get one free $215 ticket to the Sunday Million tournament.

The entire point structure is posted on the Leader Board web page. Depending on where players finish in a MicroMillions tournament, they receive an appropriate amount of points. For example, in a nine-handed tournament, the champion receives 100 points, with second place receiving 80, and third place receiving 70. Points are awarded to anyone that cashes in the tournament.

Players should note that there are 11 tournaments in the MicroMillions that have six-figure guaranteed prize pools. One of those tournaments actually has a million-dollar guarantee, which will take place on March 23 in Event #98: the $22 NL Hold’em Main Event. This also is the most expensive tournament to enter out of the entire 100-event schedule. The first large-sized guarantee tournament takes place the same day the promotion kicks off, on March 13, in Event #2, the $1+R NL Hold’em 3x-Turbo tournament which will have a guarantee of $150,000. The next day, in Event $11, a 6-max $11 NL Hold’em tournament will offer a $100,000 guarantee. For those of you that want to spend the absolute minimum amount of money possible, the series kicks off with Event #1, which costs only $0.11 to enter, but allows for rebuys. The MicroMillions tournament series offers No Limit Hold’em events, played in a wide variety of formats including nine-handed, six-handed, Turbo, 3x-Turbo, Ante Up, Zoom, and Shootout formats.