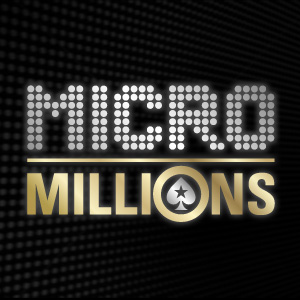 The PokerStars MicroMillions 8 tournament series kicks off on July 17 with 100 events adding up to $5 million in guaranteed money for micro-stakes buy-ins. (Image: PokerStars.com))

While many poker players have dreams of playing in massive championship events at the World Series of Poker (WSOP) or online at the PokerStars World Championship of Online Poker (WCOOP), the buy-ins are often too prohibitive to make that a reality. That makes the MicroMillions tournament series held at PokerStars one of the most popular of the year, because players can win huge prizes for microscopic buy-ins.

The idea behind MicroMillions is that massive tournaments that have micro-stakes buy-ins will allow players to win gigantic sums of money. PokerStars has guaranteed $5 million will be given away during the series, which will start up on July 17 with a $0.11 Re-Buy No Limit Hold’em “Hyper-Active” tournament that has a $20,000 guarantee. Yes, you read that correctly, the entrance fee is eleven cents and allows re-buys.

For those who have never experience this unique series of tournaments, the action is extremely fast, furious, and wild, to say the least. That being said, some very serious small and mid-stakes players participate, so there’s also great poker to be played as well.

Outside of the cash to be won over the 100 event series, there are also “Player of the Series” prizes available to be won via a Leader Board page. There is also a MicroMillions Challenge that players have to opt into using Star Code “MM8” on the site. Players that complete the challenge by playing in six or more events receive a free ticket to the All-in Shootout to fight it out to win cash prizes.

Events during the series will span buy-ins from as little as eleven cents and max out at $22 for the Main Event. Most of the tournaments have buy-ins ranging from $2 to $5, meaning that micro-stakes and small stakes players will have a field day throughout the promotion. Every day there are multiple events to be played in as well, so players are encouraged to review the tournament schedule (the link is above) to plan ahead and play in the best events possible.

The Main Event of MicroMillions 8 will be played on July 27 as well and offer a million dollars guaranteed prize pool. Dubbed “MicroMillions Event #98,” it has a $22 buy-in, is a No Limit Hold’em format game, and promises $100,000 minimum to the first place winner.