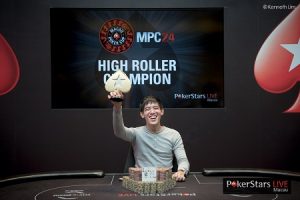 It was Ying’s second major in as many months. On January 4, he won the World Poker Tour National event in the Philippines, a tour that was acquired by a Hong Kong company, Ourgame, last year, looking to capitalize on poker’s growing popularity in the region.

The ranks at PokerStars LIVE Macau were swelled by players from the Chinese mainland, where gambling is illegal, although live poker tournaments have been tolerated by the government in recent years.

The APPTs Beijing Cup and Beijing Millions were spectacular successes, despite the APPT Nanjing Millions being unexpectedly shut down by authorities last April under mysterious circumstances.

Match Poker is a poker variant created by the International Federation of Poker, an organization dedicated to promoting poker as a “mind sport,” as is chess. It’s a team game that claims to remove the element of chance by matching up single members of each team on separate tables, and dealing the same cards to each table. It is, as such, not a gambling, which makes it more palatable to Chinese authorities.

Alibaba is one of the biggest Internet companies in the world, with a market cap of $173 billion, and it hopes to develop two million Chinese poker players over the next two years.

Poker seems to be enjoying a mini-boom in the region. But while it was all smiles at the Macau Cup, and Ying posed with the Red Dragon Trophy, an academic study this week reminded us that the dragon has a seedy underbelly.

There have long been whispers about the Hong Kong triads in Macau, and of their infiltration of the gambling hub’s VIP industry, but the extent of their participation has been a matter of contention.

Malaysian high stakes poker player and bookmaker Paul Phua was once one of the biggest junket operators in Macau and has been dogged by rumors of ties to the 14K triads, allegations he has repeatedly denied.

But a new study by academics at Hong Kong’s City University has concluded that the junket industry, which has formed the bedrock of Macau’s revenues over the years, is dominated by the triads.

Even more damning, it found that casino operators would specifically select the most powerful triads as their VIP managers in the pursuit of profit.

Casino operators and the Macau regulator have both denied the existence of any form of cooperation with the criminal gangs.