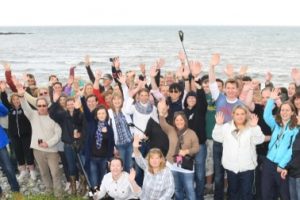 PokerStars employees working for charity on the Isle of Man. (Image: pokerstarsblog.com)

PokerStars makes charitable donations a priority in its business. Its Rational Group parent company has used its Helping Hands program to reach out to various donations for a decade, giving to everything from cancer research to its latest fundraising effort for Typhoon Haiyan relief for Philippines residents.

The latest move from Rational Group now allows players to donate on a regular basis, without waiting for a particular fundraising effort or time period. Players can use their points to donate to CARE for disaster relief or Cancer Research UK at any time.

Points for a Cause

Players on PokerStars accumulate Frequent Player Points when playing anything from the smallest cash games to the largest tournaments. Points can then be used for various purposes, such as buying in to freerolls and satellites or purchasing items from the VIP Store.

Now, those points can have a bigger purpose. Players are able to use points to donate to CARE for international disaster relief or Cancer Research UK. By simply going to the VIP Store while on PokerStars or visiting the VIP Store’s charity donation page, players can exchange 1,200 FPPs for a $20 donation to either organization.

In addition, the donation is made in the player’s name, giving that player the opportunity to use the gift as a tax deduction in parts of the world where that is allowed.

Helping Hands plans to expand the list of charities going forward, as PokerStars continues to focus on the desire of its executives, employees, and players to help others around the world.

Past Donations and Causes

The most recent fundraising effort from Rational Group wrapped up in July with a hefty donation of more than $560K to CARE, specifically for the people of the Philippines who were hit by Typhoon Haiyan in late 2003. The combination of dummy tournaments and funds transfers from players on PokerStars and Full Tilt accrued more than $280K, and Rational Group matched that, to double the amount and donate after about six months of fundraising.

The very first donation from PokerStars was made in 2004, when players donated to the Red Cross for people suffering from tsunami damage in the Asia-Pacific region. That donation was $400K, with PokerStars matching and adding to more than $187K raised by players alone. The following year, funds were raised for victims of the Hurricane Katrina disaster in the United States, with money again going to the Red Cross.

Where tragedy hits or comes to its attention by way of players or Team Pros, PokerStars has donated generously and given players easy ways to donate a little or a lot to help. Organizations that have benefited from the Rational Group and Helping Hands include amFAR and Life Ball for AIDS research, NOOW for Darfur relief, Pretoma for shark protection in Costa Rica, Avon Foundation for breast cancer research, and the International Red Cross.

Paws up to PokerStars for a pawsitive cause!

That’s one of the resons stars is the best (free chippie :))