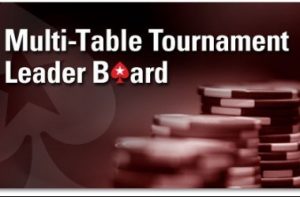 PokerStars leaderboards will have a new schedule in 2015, placing a greater importance on year-long performance. (Image: PokerStars.com)

PokerStars leaderboards are the latest component of the world’s largest card room to undergo changes since being bought out in June by Amaya Gaming Group.

Announcing the news on the company’s blog, PokerStars will increase the Yearly Leaderboard from $200,000 to $450,000 in cash, prizes, and promotions in 2015. Although the current system includes weekly, monthly, and annual standings, the increase in yearly value will be supplemented by eliminating the monthly offering.

While the company would like you to believe it’s simply rewarding its players with more gifts, the discontinuing of the 30-day leaderboard will more than cover the additional revenue added to the yearlong race. To date, the top 1,000 monthly leaders shared over $40,000 in prizes, or $480k for all 12 months.

Recreational players, who don’t often compete on the yearlong standings, shouldn’t be completely discouraged by the announcement. During the months of June, July, and August, typically the slowest participation period, PokerStars will offer a special Summer Leaderboard featuring $100,000 each month in prizes.

Though details on the summer session haven’t been revealed, rewards are expected to come in the way of tournament entries and tournament money, which could provide the more casual player with a path for success on the annual rankings.

From January 1st to December 31st, players will tally their 100 best outcomes in order to determine their yearlong position. In an effort to attract more high volume participants, PokerStars is banking on the annual race satisfying its customers, and hoping the omission of monthly payouts will be overlooked.

Although weekly boards will remain, the influx of prize money and promotions into the yearly pool is evidence the company wants players buying in more frequently, and on a more consistent basis.

Player performance depends on entry fees, number of players, and of course payouts and finishing positions. The leaderboard will award substantial prizes to the top 40 players, up 30 from the current arrangement.

Despite the fact there will be more winners, it likely won’t increase the odds of a casual player winning, since the leaderboard will be compiled of daily pros and skilled semi-pros who find success at PokerStars’ marquee events. For someone to land near the top, they’ll need strong finishes at big tournaments like the Sunday Million series and World Championship of Online Poker.

In addition to receiving a $75,000 freeroll entry, up to one year’s worth of Sunday Million tickets, and $5,000 worth of major online series tickets, the top three finishers on the final leaderboard will receive the following cash payments:

Those finishing fourth through 10th will also get up to one year’s worth of Sunday Million tickets, $5,000 worth of major online series tickets, and entry to a $75,000 freeroll. The next 60 on the leaderboard will also receive the $75k freeroll entry.

Experienced PokerStars players should be fairly responsive to the updated arrangement, but will hobbyists be turned off by the more competitive structure? We’ll have to wait and see.