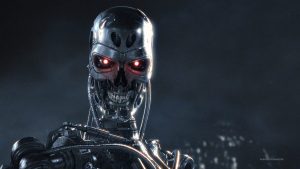 Rise of the Machines: PokerStars’ termination of various accounts related to the PLO cheating ring suggest that robots not humans are in control. (Image: pinsimdb.org)

PokerStars has closed down at least 16 accounts in relation to what may be a pervasive bot ring at its PLO50 and PLO100 tables.

Many more accounts are implicated, and there are suggestions that the ring might also stretch across Full Tilt and 888.com.

PokerStars has confirmed its investigation is ongoing.

Meanwhile, players on the TwoPlusTwo forums, who are conducting their own public investigation, believe they may have identified as many as 35 suspicious accounts, and estimate the ring may have won as much as $1.5 million.

Suspicions were first aroused on TwoPlusTwo in March when it was noticed that seven big winners on the mid-stakes PLO tables had remarkably similar stats. The information had been collected from shadowy data-mining site whoTFRU.info, also known as “Russian PTR,” which provides data for a handful of regs on an invite-only basis, in return for expensive subscription fees.

Who TFRU.info provides an unfair edge to elite clique, which many consider unethical, but on this occasion a couple of regs “Oink” and “Grethe” were able to use its information blow the cheating ring open.

“…there have been a group of players from some Eastern European countries the last 18 months or so, that has really triggered my curiosity,” wrote Oink, spelling and grammar his own. “They all play very similarly, they all do the same type of things.

“They have the same tendencies (ie, 4bet wide oop with a range of hands you dont typically see regs 4bet at these stakes, squeeze very wide in the BB compared to the pool of regs, they are all more showdown bound than typical regs and they have the exact same tendencies on the river.)

Initially it was suspected that the suspicious accounts were being controlled by humans using automated decision software, programs that offer players game theory-optimal moves, but leave the actual button-clicking to the player who is able to adjust as they see fit.

The posters noted, for instance, how the suspicious “players” would appear to clock on and off, often putting in eight-hour shifts; all very human.

But meanwhile it became clear that PokerStars had also noticed the anomalous stats, were conducting their own investigation, and had begun to shut down accounts, a fact that the poker site eventually confirmed to a number of posters via email.

Ghost in the Machine

The fact that PokerStars were closing the suspicious accounts was curious because automated player assistance software is not necessarily banned by the site’s terms and conditions.

In fact, similar software, recently found to be in use by a small number of players in high stakes heads-up sit and gos, was not banned, despite complaints from players.

But, as TwoPlusTwo posters continue to call out suspicious accounts, we may never know exactly what that is, or indeed the scale of the problem.

As a matter of policy PokerStars does not comment on the nature of the terms of service violations and may never publicly reveal the full results of its investigation.

“Please rest assured that we do not tolerate automated players (bots) on PokerStars,” the site informed one poster over the weekend. “We have an extensive arsenal of detection tools in order to ensure that each player is a human being.

“We are currently conducting an investigation of this issue. This may take several days to complete and we appreciate your patience during this period.”

told you all ages ago…not being smug x