PokerStars in New Jersey Around the Corner, Per Ray Lesniak 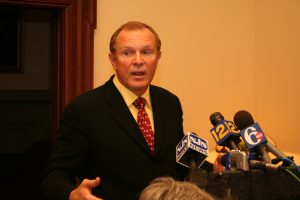 PokerStars’ return to New Jersey is imminent and international player pool-sharing will follow close behind, State Senator Raymond Lesniak has hinted via Twitter. It was clear that the senator was just bursting to tell us something towards the end of last week when he took to the micro-blogging site to announce: “@PokerStars launch will spark an AC revival. Stay tuned for a major announcement…”

Then, three hours later, like a big kid with an enormous secret that he simply could not contain, Lesniak dropped the bombshell.

“Most important is whether we open the player pool to Europe, etc. What timeframe do you have on that?” demanded a tweeter. “Soon,” replied Lesniak. “Stay tuned for that also.

And just in case all this was open to misinterpretation, Lesniak later qualified his initial remark. When asked a question about other states’ ability to “opt in” and form compacts, he replied simply, “soon to be countries.”

While New Jersey Governor Chris Christie has said recently that he’d “had conversations” with Nevada Governor Brian Sandoval over the possibility of player pool-sharing between the two states, the news that international shared liquidity may, in fact, be on the cards represents a monumental development for the online poker market on both sides of the Atlantic. It also comes as a huge surprise.

A long-time champion of regulated online gaming, Lesniak knows that pool-sharing is a requisite for the success of New Jersey’s online poker industry, especially if he is to see his vision fulfilled, that New Jersey can become “the silicon valley of internet gaming.” The senator was one of the architects of the legislation surrounding the legalization and regulation of online gaming in the state and sees it as integral to New Jersey’s economic recovery. Lesniak also proposed the bill earlier this year that sought to revoke state laws prohibiting sports betting at casinos and racetracks; a bill that was initially vetoed by Governor Christie before being approved this month in a dramatic about-face.

While the law as it relates to online gambling is never completely clear in the United States, there is no federal law (as far as we know) that bans the offering of online poker between two licensed jurisdictions, whether they are US states or nation states, as long as there are no restrictive laws within the participating states.

An international player pool would be huge for online poker in New Jersey and any of the new US markets that chose to opt in. It would allow these fledgling markets to grow and flourish among more mature markets, such as the UK. The dramatic increase in liquidity will permit a wider variety of games and stakes and the ability to offer enormous prize pools, which would in turn attract new players and tempt back those who play on offshore sites into the regulated market.

Why is it just those states. There Are alot of us IN Other states that want to join in the fun. I get all these promotions but I can’t play because I’m not from those states.