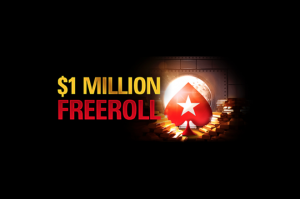 A PokerStars freeroll on March 19 will have a guaranteed $1 million prize pool. (Image: Poker News)

A PokerStars freeroll later this month will excite many recreational players and possibly even grinders. The world’s largest poker site announced back in December it had plans to host a $1 million freeroll. Details of the event, at the time, were sketchy.

Things have been cleared up, and the freeroll has been scheduled for the 19th of this month. Poker players in the United States, like always, you aren’t invited to the party thanks to your government.

“Only” 100,000 players will be allowed to enter, and getting into the tournament requires more than simply signing up. Players must first opt-in at the Challenge Window. The next step is to play one hand at any real money cash game.

A satellite ticket will then be released. Players use that ticket to enter a 90-player Sit & Go satellite, with the top nine players receiving entry into the $1 million freeroll. Those who fail to finish in the top nine can get another satellite ticket by making a $20 or more deposit and using promo code “MILLION1”.

If you are fortunate enough to earn a seat into the freeroll, you will have to defeat a massive field in order to win the big bucks. $1 million is the sum of the total prize pool but “just” $20,000 will be awarded to first place.

Paying the winner such a small percentage of the prize pool leaves more for the remaining players. PokerStars estimates that 30,000 to 50,000 players will be paid. The poker site hasn’t released specific payouts as they will have to wait to see how many players end up earning a spot in the tournament.

PokerStars is making strides towards attracting more recreational poker players. This marketing strategy has angered many poker pros. This freeroll likely won’t cause a stir among the grinders, however, but it is another example of PokerStars shifting its focus more towards the casual poker player.

There are other poker sites using a similar strategy. 888poker and TonyBet recently rakeback programs which will benefit recreational players more than pros. These poker sites are merely responding to changes PokerStars made to its VIP program late last year.

The reason PokerStars and other online poker sites are trying to appease the recs is because they see it as a better long-term strategy. Sustaining a poker site long-term in the post-Black Friday era isn’t easy.

These companies realize the grinders aren’t difficult to keep around. Despite their boycotts and complaints, they need a place to play poker. Casual players are different. They don’t “have” to play as they don’t rely on poker to pay the bills.

When recreational players run out of poker money, in most cases, they walk away. That’s why the top poker sites are now creating new promotions, including epic freerolls and advantageous VIP programs, to keep those players in the game longer