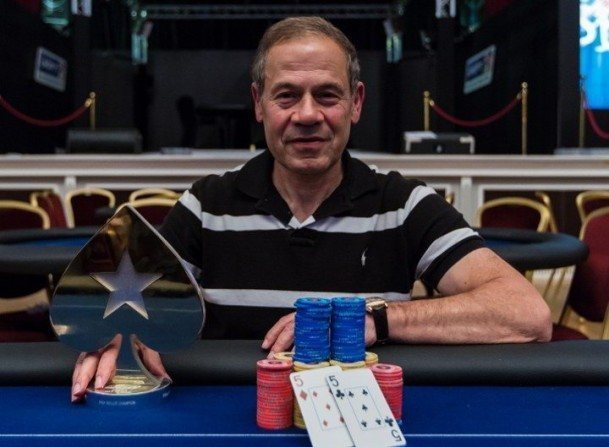 Isai Scheinberg for the win: Terrance Chan and other industry insiders call for Scheinberg’s induction into the WSOP Poker Hall of Fame. (Image: Danny Maxwell/PokerStars Blog)

For some, Isai Scheinberg, the controversial founder of megasite PokerStars, has been slighted repeatedly, while for others, his exclusion from this prestigious club is legitimate. We are speaking, of course, about the Poker Hall of Fame (PHOF).

Voting for this year’s PHOF, sponsored by WSOP.com, is well underway, and while nominations for many of the game’s finest players are flying in from all directions, there’s growing momentum for this notorious industry figure to be included at last.

Despite being one of the more elusive members of the poker world, Scheinberg the Senior was the man behind the largest online operation in existence, and according to some, that’s reason enough for him to be included in this year’s Hall of Fame.

Following a tweet from the WSOP’s official Twitter account calling for people to cast their votes, PokerStars’ stalwart Lee Jones decided to chime in and put Scheinberg’s name forward. This suggestion was followed up by a forum post from pro player, MMA fighter and industry insider Terrance Chan.

Challenging anyone to name someone who has had more influence on the poker world than the ex-PokerStars boss, Chan believes that if WSOP  will ignore this suggestion at its own peril.

“In my opinion, if the man who has done more to grow poker than any other individual in the world in the past 20 years (at least) is not in the Poker HOF, it is illegitimate,” wrote Chan.

Although he acknowledges that he has certain allegiances to PokerStars, having enjoyed a fair amount of success on the platform over the years, he does say that the influence of the company has helped spawn hundreds of careers.

From poker players and tournament staff, to journalists and TV presenters, PokerStars has enabled thousands of people around the world to work in the poker industry over the last few years and the man ultimately responsible for this was Scheinberg, is Chan’s reasoning.

However, regardless of his influence, Chan believes that the WSOP won’t induct Scheinberg, because Caesars won’t want to bring any attention to PokerStars. Of course, this may or may not be the case, but a number of poker fans are now petitioning for the Israeli businessman to become the next Hall of Fame member.

In addition to calls for Scheinberg to be inducted this year, players across Europe are pushing for Dave Ulliott, aka the Devilfish, to join the likes of Doyle Brunson, Phil Hellmuth, and Johnny Chan.

Known as one of the most entertaining players to ever grace the felt, Ulliott passed away earlier this year after a battle with cancer, and players feel it would be a fitting tribute to his legacy if he was given a spot in the class of 2015.

In case you forgot he was deemed a criminal in the US Governments eyes and did many things illegal.
How is that good for Poker?

I say nay to him being inducted into the HOF & I am sure many players who want the game to be better represented and moving from the black mark that has been put on Poker.

In order for Poker to move forward and become legitimate and be more respected, we need to move from the shady characters of poker who had their part in putting a black mark on it.

Daniel Negraneau represents and showcases the brand like Poker should be. Then we will see Poker spread like wildfire and be more welcoming and accepted as a real sport or respectable game. People and governements would be welcoming the game with open arms.

Terrane chan is asking for isai scheinberg to be inducted in hall of fame.. how surprise s that ? lol .. anyone getting sponsored big time by pokerstars , no wonder ll Support the Person. he is a criminal and wanted by USDOJ.. so no . he should not be inducted into halloffame..