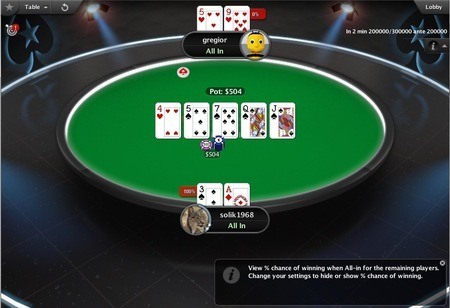 The PokerStars Dream Team Collection came to an end as “solik1968” bagged $1 million in the final All-In Shootout. (Image: PokerStars)

The PokerStars Dream Team Collection, the online operator’s latest promotion, has come to an end after over a month of online action.

The promotion culminated in a Golden Ticket All-In Shootout, whereby ‘Stars players were forced to go all-in every hand to have a chance of bagging a cool million. Ultimately, online player “solik1968” took down the tournament for the life-changing haul.

European soccer stars Cristiano Ronaldo, alleged tax-evader Neymar Jr., and Brazilian World Cup winner Ronaldo Nazario, all of whom were snapped up as PokerStars SportingStars recently, were on hand to give out signed shirts as part of the prize cache.

Players then had to earn pieces of “puzzles” by playing Spin & Gos, Sit & Gos, MTTs and Hold’em cash games. Complete the “missions” and collect nine pieces of the puzzle, and random rewards were handed out. Those ranged from a $20,000 All-In Shootout ticket to a Golden All-in Shootout Ticket with a chance of winning the big prize.

How to Win a Million Bucks Without Playing

It was 47 players who made it through to the Golden Ticket tourney, with first prize getting the million and 2nd to 9th places getting…er, a signed soccer shirt. And with nothing really to be done about ICM or style of play, all the final tablists could do was sit back and watch the all-ins do their magic: either heavenly or black.

Eventually, UK-based player “gregior” found himself up against Ukrainian “solik1968”. Dealt Ad 3s, solik1968 was in good shape against gregior’s 9h 5h. With the flop running out 4h 5s 7s, solik1968 could still be confident of hitting one of his outs, and so it proved as the backdoor flush arrived in the form of the Qs and Js on the turn and river.

While the fateful spade on the river appeared to have sealed a bad beat to end all bad beats on gregior, it later transpired he had sold some action prior to sitting down. According to his friend “judgedredd13”, around $10,000 was sold to investors before the Shootout, at least guaranteeing the UK player a small consolation.

While Ukrainians were busy bagging life-changing wins on the web, PokerStars’ office staff was celebrating a milestone of a different kind. It’s 10 years since PokerStars first set up home in the Isle of Man.

The gaming jurisdiction, which is part of the British Isles, has been home for ‘Stars before UIGEA was a twinkle in Congress’s eye, and the firm’s Interim CEO, Michael Hazel, celebrated with a statement put out this week.

“PokerStars … had a great 10 years on the Island. We are extremely proud to be part of the local community and are delighted they can share in our celebrations. Here’s to continuing to work together into the future,”Hazel said.

Islanders will be treated to a “3D projection and lighting spectacular” in the Villa Marina gardens this week as part of the celebrations. It’s not known whether the Isle of Man’s residents will also be given free buy-ins to the UKIPT (UK and Ireland Poker Tour) on the island. The tournament, the latest in a series of live events happening across British and Irish towns, runs from October 1-4.

How is this crapshoot even called poker? IDK