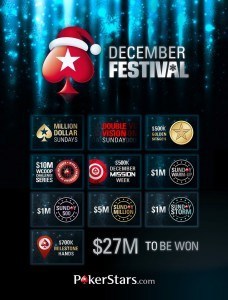 The PokerStars December Festival, which includes six major promotions for players to participate in to win millions of dollars. (Image: PokerStarsblog.com)

Already underway, the PokerStars December Festival will dish out a minimum of $15 million to players during its month-long celebration.

During the festive promotion at PokerStars, every single real-money player that logs in and plays has a chance to win massive cash prizes, including boosted prize pools in the site’s most popular tournaments.

In addition, players can enjoy $1 Million Spin & Go‘s where they just might be able to turn $5 into an enormous payday in minutes.

There are six distinct major promotions happening at PokerStars during the December Festival, including $1 Million Milestone Hands, a $5 Million Guaranteed Knockout Week, and Zoom & Boom.

Spin & Gos are 3-max Hyper-Turbo Sit & Go tournaments that feature just 500 starting chips. The idea is for some fast, furious, and fun action for players to enjoy. This new format debuted only a few short months ago, and the majority of these tournaments are played as winner-takes-all tournaments.

Players can play their favorite cash games for a chance to win a piece of a million dollars in cold cash 300 times during special Milestone Hands. All players need to do is keep an eye out for hands that end in six zeroes on the PokerStars lobby hand counter. Cash prizes are awarded every millionth hand, across 300 million hands. All players need to do is sit at real-money cash games for a chance to be dealt into the Milestone Hand. The prize players are eligible to win depends on the activity over the course of the previous 49 hands, plus the number of VIP Player Points (VPPs).

There’s going to be an exciting week of Knockout and Progressive Knockout tournaments during December 8 through December 14. Players will be able to compete for more than $5 million, highlighted by a Main Event on December 14. Players are encouraged to check out their personal Challenge Window in the PokerStars client or Mobile app to find special challenges during this week, as there are extra prizes to be won just by playing in the tournaments.

If a player gets dealt two red aces on a Zoom cash game, they could win up to $50 every single day. They just sit at a real-money Zoom ring game, get dealt two red aces, and win with that hand post-flop. If a player accomplishes that feat, they will be given a cash prize of 50 big blinds at the stake they are playing at, up to a max of $50 within 48 hours.

While Sunday is the biggest day of the week for online poker tournaments, PokerStars is treating December 21 a little differently, as it is going to get even bigger. There will be not one, but two versions of some of the biggest Sunday tournaments, meaning there is double the guaranteed money on the line.

A week after Double Vision Sunday, a player will be able to really make 2014 a great one by winning what will be a $5 Million Guaranteed Sunday Million tournament at PokerStars. This tournament will award a minimum of $500,000 to the winner. Players can get into this tournament in a variety of ways outside of just paying the buy-in, including winning a satellite that could cost just $1.