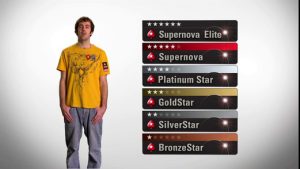 The PokerStars SuperNova Elite VIP program will lose approximately $5,200 of its overall value next year. The details were given to players by the most popular poker site in the world via email recently, reducing what is easily the most lucrative VIP loyalty reward program in the business.

While the amount is about 5 percent of the overall value of the upper-most tier of the program, being SuperNova Elite will still be worth a little more than six-figures.

Players were informed in an email last week that the $5,200 reward for tournament tickets that were aimed for players to use towards playing in WCOOP, TCOOP, or SCOOP events will no longer be awarded to players that reach SuperNova Elite (SNE) status.

Those players who do reach the club in 2014 will be rewarded those tickets, but they will be the last group of players who will receive the juicy perk.

PokerStars players were concerned that more widespread and deep changes were coming to the site’s VIP program in 2015, after the company issued an ominous statement that there was a substantial review underway and that the company was completely reevaluating its rewards program. So far, this is the only update to any of its programs that has been announced.

Good and Bad News for All Players

The good news is that this reduction is well below what most players were speculating would happen for those chasing online poker’s ultimate VIP status level in 2015. The bad news is that PokerStars did suggest that more changes, and perhaps ones that are even bigger, are still on the horizon for the year after that.

According to comments made by Steve Day, the head of Ring Games and the VIP Club at PokerStars, it’s obvious that this particular change for SuperNova Elite players won’t be the last. “While we are making only this one change this year, it follows a substantial review of the PokerStars VIP Club conducted earlier this year. We are considering more significant changes for implementation in 2016. Details will be available in the second half of next year,” Day said.

Day also stated that players in the United Kingdom will see reductions to the VIP program next year, purely as a result of the new regulations which take effect on November 1 of this year. And while they may not number nearly as many as they do in the UK, the same fate awaits players in Bulgaria.

It is estimated that fewer than 400 players in the world will reach SuperNova Elite status this year, so the move does not really impact that many grinders. Doing the math, the reduction of $5,200 in value to 400 players means that PokerStars has saved itself $2,080,000 from SNE players.

It takes ten times as many VPPs (loyalty player points awarded in tournaments and ring games) to attain SuperNova Elite as it does SuperNova status. The rewards, however, are staggering, as players that achieve that amount get $1,200 in Stellar Rewards, a minimum of $43,200 in Milestone Cash Credits, and $1,600 in purchasable VIP Reward Bonuses for every 100,000 FPPs they attain.

I don’t understand this cut. I think it’s insignificant to pokerstars…
Also the rewards for Supernova elite are still good.

This cut is pretty ridiculous, even at the “pre-cut” level for SNE Pokerstars was still making a large profit in rake collected vs total amount paid out. Trying to squeeze out even more is just gross.