PokerStars and Cristiano Ronaldo Challenge Players to Beat the Clock 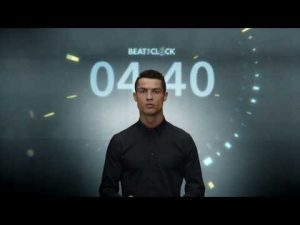 PokerStars uses Cristiano Ronaldo to show off its Beat the Clock tournaments to the masses. (Image: YouTube.com)

PokerStars’ bid to attract more casual poker players took another step forward recently with the launch of Beat the Clock.

In line with innovations such as Spin & Go tournaments and Zoom, Beat the Clock tournaments have been designed to offer high octane, high energy and high entertainment.

As the online poker industry continues to evolve, catering to a less experienced, less skilled demographic has become a necessity.

PokerStars has realized this as much as anyone in the last two years and Beat the Clock appears to be another move in this direction.

In fact, as a testament to this innovation’s place on the “casual” spectrum, soccer star Cristiano Ronaldo has been drafted in to promote the tournaments.

Pictured screaming the name of the game in front of the Beat the Clock logo, Ronaldo not only gives the new tournaments some credibility, but a reason for the media outside of the poker industry to take notice.

In fact, a recent Instagram post with the caption “unleashed my inner lion while filming with PokerStars” had been viewed 3.9 million times and commented on by more than 3,800 at the time of writing.

This level of exposure is exactly what PokerStars will have been hoping for when it sponsored Ronaldo and, moreover, the reason why tournaments like Beat the Clock are now an integral part of the site.

A Quicker Way to Play

Using a Zoom format, the tournaments have a minimum number of required players to start (48) and entrants can currently buy-in for $1, $3 or $5.

Essentially part of a new “bite sized” poker movement, the games are best suited to mobile players who are, mainly, casual players. Regardless of what some believe, it seems to be the case that in order for the online poker industry to grow, more casual players are needed.

PokerStars’ Beat the Clock is just another example of how sites are reacting to this as are other innovations across the industry such as webcam poker at 888poker and HUD-less tables at Unibet.

Interesting concept. I can’t wait to see what Professional online player comes out with a way to play this game profitably. It also seems that Pokerstars is one step ahead of the competition, again.

I have not tried the novelty yet but I look kindly on the innovations of the poker industry to attract new casual players, fast games really attract the audience that plays occasionally….Are very creative these guys who work in this area to invent new attractions