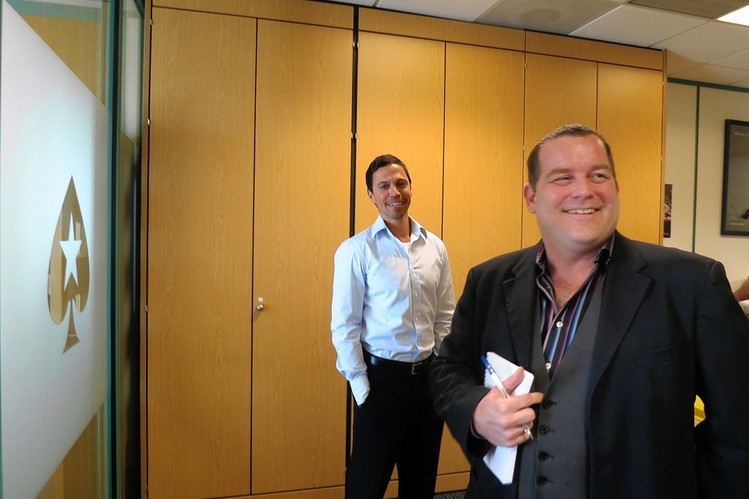 Vindication for PokerStars: Eric Hollreiser (right), VP of corporate communications at Amaya and PokerStars, said this week that the three-day boycott produced the “healthiest consecutive ecosystem results of the year.” (Image: Alexandra Berzon/wsj.com)

The recent PokerStars boycott, by a group of high-volume, high-stakes players, may have completely backfired.

The online poker giant said this week that last week’s three-day player sit-out actually briefly improved the poker “ecology,” to quote spokesman Eric Hollreiser, which makes the company even more determined to follow through with its proposed changes to the VIP structure.

Players organized the boycott to run from December 1st to 3rd in protest of the changes, which PokerStars says are designed to favor the recreational player over the professional in a bid to grow the poker economy.

Recreational players have abandoned online poker in recent years, due largely to the widening skill gap. Faced with multi-tabling players using tracking software and seating scripts, amateur players are simply not finding the game fun anymore, and are swallowed up and spat out, never to return. Online poker is cannibalizing itself, or so the theory goes.

PokerStars gave little warning when it announced it would be simplifying the rewards program to benefit the “vast majority” of players.

The introduction of a new VIP steps program and the replacement of the variable FPP currency with a constant value, to be known as StarsCoin, would reward the recreational player, while Supernova Elite, Supernova, and Platinum Star players would be impacted detrimentally as a result of the new system.

But these high-volume, high-stakes players, who are, by definition, the site’s best customers, were up in arms, and many felt betrayed. Some even said PokerStars plans wouldn’t work, and the imagined hordes of recs simply would not materialize, even after the changes had been implemented. Around 2,500 top online players joined the sit-out.

But the protest had the unexpected consequence of vindicating PokerStars, according to Eric Hollreiser, the site’s VP of corporate communications. While Macropoker estimated the boycott cost PokerStars $700,000 in lost rake, Hollreiser claims that nothing could be further from the truth.

PokerStars Sticks Out Its Tongue at High Rollers

“In that spirit of transparency, we can tell you that we did see effects from the recent boycott that give us even greater confidence that our strategy is on the right track to improve the health of the ecosystem,” wrote Hollreiser on the PokerStars blog this week.

“During the three-day boycott we recorded the healthiest consecutive three-day ecosystem results of the year with steady net gaming revenue, even though our net-depositing players lost at a much lower rate than they have all year,” he added.

“As we have seen with Spin & Go’s, which have higher retention levels than cash games due to the increased winning experiences provided to all players, we believe this decreased loss rate will result in those players’ deposits lasting longer and retention rates improving, resulting in more deposits and more money in the system because players are enjoying their time at the tables more. This is the right foundation for us to build upon.”

The message to the top tier of online players is clear: you need us more than we need you. So there.