PokerStars has announced that some changes are coming to its much-vaunted VIP rewards program, ones that will see the program take on the name “VIP Steps.” But early reaction from players has been overwhelmingly negative towards the new program, with some going as far to call the changes a “money grab” by PokerStars. 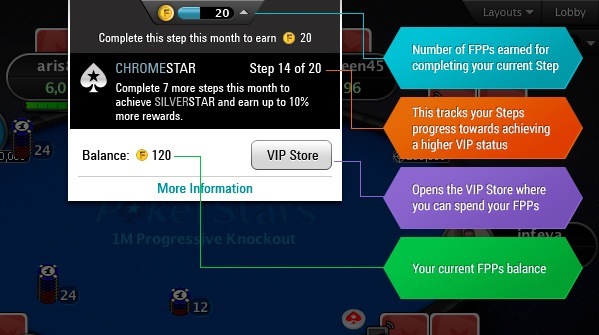 The new PokerStars VIP Steps program is designed to add more visualization to the FPP program on the site, but the details have upset some players. (Image: PokerStars)

The new changes, which are being implemented on October 1 in the United Kingdom and then slated to go live around the world on January 1, are now being beta-tested in the UK by players who wish to opt in. According to a post by PokerStars Dylan on the Two Plus Two forums, the idea was to create a rewards system that was more transparent and accessible to players.

“One of the primary purposes of Steps is to surface VIP Rewards to players so that there is a more intuitive relationship between playing and earning FPPs,” Dylan wrote. “We expect this to be a more engaging method for players to earn and understand their rewards.”

Under the new system, players will earn Frequent Player Points (FPPs) by completing a progress bar that shows them how close they are to finishing a “step.” FPPs won’t be released until players finish that bar.

The bars are part of an overall plan to make players more aware of their rewards through visualization. Players will easily be able to see how close they are to finishing a step, how many more steps it will take to move up to the next level in the VIP Club, and their total number of FPPs.

All of this leaves one rather obvious question: what happens to the FPPs that a player earns if they don’t complete a step by the end of a month? The answer to that question is what has many players crying foul over the VIP Steps program.

“At the end of the month for monthly statuses, and end of the year for Supernova+ VIP statuses, players will receive 50 percent of the prorated value of their incomplete current Step,” Dylan wrote.

In other words, players will lose half of the value of any FPPs earned for a partially completed step. It’s a move that PokerStars says was done to encourage players to play a little bit more in order to hit their next step at the end of the month.

“The 50 percent prorated value for an incomplete Step was not designed as a means to reduce rewards, but rather to improve players engagement with VIP Rewards and incentivize players to complete their Step at the end of the month,” Dylan wrote. “The values of the Steps are configured with the understanding that not every player will complete their last Step and earn its full reward.”

However, many players in the forum thread where the announcement was made did not buy this explanation.

“There is no upside to these changes for the players,” wrote Aces123123. “I don’t find it engaging if I lose FPPs just because I didn’t play a certain amount.”

Others points out that even if this program was a downgrade for players, it was likely only a very slight one. However, they noted that likely changes in the PokerStars rewards program in 2016, particularly in the UK, were set to have a much bigger impact on players.

“Complaining about this is like complaining about the noise the V-1 flying bomb makes as it flies towards your house,” wrote daddyrnac. “Yet come 2016 when the new VIP changes are implemented that bomb is going to explode bang on your roof.”

Doesnt sound good in no way. I agree that there should be more options and task to one player achivement and not just that FPP desides it. Earning those FPPs and not b able to finish last few tasks and taking 50% of earnd FPP – just sounds apsurd. If they already know where that leads 2 – they should not even make those changes. And another thing – how to reach those achivements if tourny after tourny or ring game you get bad ( dead ) cards with no profit and cash to continue. And we all know its hard to have good days in row.

Just another way Amaya is squeezing the players by either increasing the rake and fees or reducing the benefits and trying to mask it with their double talk.
Same thing happening at Full Tilt with their new program and the elimination of the Edge.
We have a saying in sales. “Never bite the hand that feeds you.”
That is all I have to say about that.