PokerStars Announces Run It Up Resorts Rumble in New Jersey 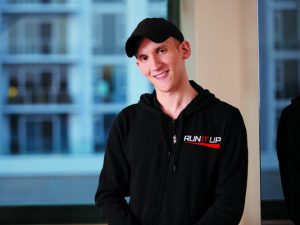 Jason Somerville twitching: You can join him and a host of pros at the Run it Up Resorts Rumble, to be held at the Resorts Casino in Atlantic City on May 4. (Image: thepokerpractise.com)

PokerStars’ New Jersey promotional ground offensive has begun, with the announcement of the Run It Up Resorts Rumble, to be held at the Resorts Casino, Atlantic City on Saturday, May 14.

Run it Up is the live poker spin-off of PokerStars Pro Jason “JCCarver” Somerville’s popular TwitchTV series, a day of fun poker play and giveaways that offer poker fans the chance to meet their heroes.

As well as Somerville, Vanessa Selbst, Chris Moneymaker, Barry Greenstein, Jen Shahade, and Liv Boeree, will be in attendance, and more, promises PokerStars.

The day, which PokerStars is also billing as its official New Jersey welcome party, will begin with an official welcome breakfast meet and greet session featuring the aforementioned pros.

Run it Up Rundown

This will be followed by a $30 buy-in online tournament on PokerStars NJ held exclusively for event attendees. Saturday night is the party night, with the promise of beachside drinks, food, and entertainment at The Landshark Bar & Grille Restaurant.

Along the way, says PokerStars, attendees will be treated to various games and activities, including a chess simulation with Jennifer Shahade while Somerville will be doing what Somerville does: streaming live on Twitch throughout the weekend.

“We’re very proud of PokerStars’ initial success in New Jersey and looking forward to seeing our fans in person as we celebrate at Resorts,” said Eric Hollreiser, VP of Corporate Communications for Amaya, in a presser. “Bringing JCarver and his band of merry poker fans to New Jersey will create even more excitement and interest in the New Jersey online gaming market.”

“I’m incredibly excited to host our first one-day Run it Up festival on the East Coast with two great partners in PokerStars and Resorts,” added Somerville. “It’s been so much fun playing and streaming on PokerStars New Jersey this month and I can’t wait to hang out with all of our awesome Run it Up fans in person. It’ll totally be worth putting on pants.”

You can win a ticket to attend the whole thing via the Run It Up: Resorts with VIP Club Live”, which takes place on PokerStars.NJ, or simply purchase a ticket on the site for $10. All money raised will go to Autism Speaks, Amaya’s charity partner in New Jersey.

Autism Speaks is the world’s leading autism science and advocacy organization, which funds research into the causes, prevention, treatments and a cure for autism, as well as increasing awareness of autism spectrum disorders and championing the needs of those with autism and their families.