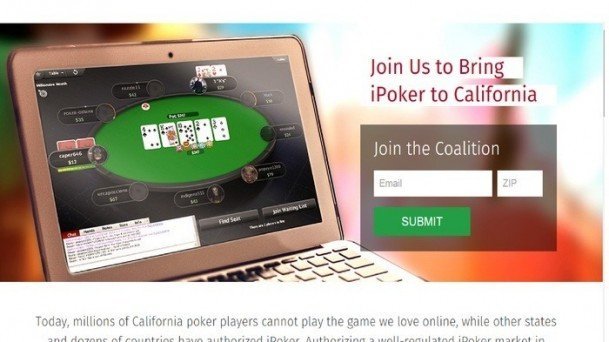 PokerStars and its coalition partners have amped up their PR drive with the kickoff of the Californians for Responsible iPoker. (Image: CRP/screenshot)

Californians for Responsible iPoker is the latest effort that’s brought together PokerStars and the Morongo tribe to finally push legal online poker in the Golden State.

The launch of the advocacy group, which includes a website, will be devoted to the establishment of “a well-regulated iPoker market in California will protect the state’s poker-playing consumers, support local business, and generate both jobs and revenue in California,” according to the group.

The alliance of PokerStars, the Morongo and San Manuel Band of Mission Indians, and the state’s major card clubs have been locked in battle with a coalition of tribal gaming operators that includes the Pechanga Band of Luiseno Indians and the Viejas Band of Kumeyaay Indians.

This coalition is bitterly against the inclusion of PokerStars, as well as the California racetracks, in a future regulated online poker market, and it is this intransigence that has caused the push for regulation to stall so far.

The gloves came off several weeks ago when the Viejas tribe launched a stinging attack on PokerStars in a paid-for radio spot, calling it a “corrupt” company because of the Black Friday indictments against site founder Isai Scheinberg and the ongoing securities investigation of Amaya by the Quebec financial regulator.

PokerStars’ response was not quite so strident, although the website did take an indirect swipe at its opponents by calling for a marketplace that is “inclusive” so that “consumers have choice and access to trusted online poker brands.”

Whether PokerStars is actually considered a trusted poker brand in the eyes of the US government is another thing entirely, of course.

“Experiences in other regulated environments have demonstrated that the most successful marketplaces are inclusive and provide consumers access to a variety of trusted, well regulated choices,” declares the site.

“Legislation authorizing iPoker in California should do the same: establish a vibrant, competitive, fully inclusive marketplace with choices for consumers and strong consumer protections; strict oversight and regulation of operators and licensees; and a financial return for the state.”

This rallying call for inclusivity does suggest, however, that the PokerStars Coalition is for the inclusion of the racetracks in the market as well. While it does not state so directly, any other stance would, of course, be highly hypocritical.

Californians for Responsible iPoker is seeking the names and email addresses of residents of the state who share its ideals, and if you fit this description you should visit the website and join the fight.

In the meantime, PokerStars will be hitting the road to win the hearts and minds of California with the PokerStars Pro Tour, which promises to “deliver big name players,” including Chris Moneymaker, Daniel Negreanu, Vanessa Selbst, and Jason Somerville, to card rooms all over.