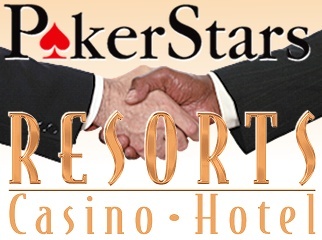 Welcome back: PokerStars and Full Tilt will return to New Jersey, but this time as fully regulated and legal online poker and gambling sites. (Image: calvinayre.com)

For PokerStars and Full Tilt, the circle is now complete: the two major global brands will finally return triumphantly to US virtual soil, but this time, as legal and kosher as can be.

That means that four years, five months, two weeks and two days after the two brands beat a retreat from the America under a cloud of ignominy, they will soon be offering their services to US customers once again, and, for New Jersey, and possibly the whole country, it could be game-changer.

The news, which brings to an end over a year of speculation about PokerStars’ possible involvement in the Garden State, was announced via press release by Amaya on September 30.

While no official statement has been released from the DGE, its president David Rebuck spoke last week of the very “thorough, comprehensive, detailed review” that the regulator was conducting with regards to the company’s application. Under particular scrutiny, he said, was Amaya’s $4.9 billion leveraged acquisition of the two brands in 2014.

“We’re going to do this in a very professional way which will be published to the world, because whatever decision we come down on will be scrutinized, and some will hate it and some will love it,” Rebuck told a Global Gaming Business podcast.

The Amaya acquisition divested PokerStars and Full Tilt of their links to the old guard, including PokerStars founder Isai Scheinberg, for whom there remains an outstanding DoJ indictment related to his company’s failure to cease offering gambling to American citizens post-UIGEA.

PokerStars applied for a license in New Jersey in 2013 before the Amaya takeover, as the state prepared to regulate, but the application was suspended by the DGE.

“The Division (within the two year period) may consider a request for relief to reactivate the application if significantly changed circumstances are demonstrated,” said the regulator at the time.

The ink had barely dried on that $4.9 billion contract before Amaya had applied for a license itself.

Apart from a few dissenting voices, such as that of New Jersey State Assemblyman Ralph Caputo who has railed against PokerStars in the past, the brand should be welcomed by most in the Garden State, and will provide a much-needed boost the state’s unsteady online poker industry.

The power of the PokerStars brand is expected to lure players away from unlicensed, offshore operators and reinvigorate the industry with its unparalleled marketing spend and major brand recognition. In time, it may open up greater opportunities for player pool sharing with other jurisdictions around the country (once PokerStars receives the now-inevitable approvals in other states), and possibly even the world.

Amaya is expected to offer its online poker brands through Resorts Casino Hotel in Atlantic City, with whom it has a commercial agreement.

“We are very pleased to add New Jersey to the long list of regulated markets that have found PokerStars and Full Tilt suitable to offer real-money online gaming,” said David Baazov, chairman and CEO of Amaya.

“I want to thank the DGE for their thorough and fair review of our business. We look forward to bringing our popular brands, innovative technology, marketing prowess and world-class security and game integrity to the growing New Jersey online gaming market. We anticipate providing additional details of our launch plans in the near future,”he continued.

A specific launch date for the two gaming sites has not yet been announced.

They may be good news for Poker Stars & Full Tilt, but they haven’t launched or got their full foot in the door just yet.

It still may take sometime to operate in the USA. There is still a long road ahead. It will take years for it to fully operate across the USA. It certainly is a start.