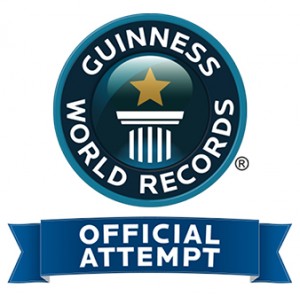 PokerStars will try for a Guinness World Record with an upcoming online poker tournament (Image: Guinness)

In a month full of Olympic feats, the biggest name in online poker wants to spend February celebrating athletes from around the world, while also attempting to break a world record. On February 23, PokerStars will yet again try to capture the record of Largest Online Poker Tournament.

Made to be Broken

The tournament will be a $1 No Limit Hold’em event with a guaranteed prize pool of $300,000. The field of players is set to a maximum of 230,000. If PokerStars were to reach that player cap, it would successfully break last year’s record, which was set in June 2013; that’s when 225,000 players registered for the $1 tournament. Last year’s winner – “Mr.SlavaPro” from Russia – won the record-breaking tournament and took home $25,000—the same amount up for grabs during this tournament—while an additional $275,000 was distributed among the top 60,000 players.

Players have the ability to buy directly into the tournament for $1. Even less money can be spent by winning a seat through various satellites. As an alternative, players making a deposit of $10 or more using the bonus code “RECORD2014” will be gifted a free ticket to the tournament. Any new players will also receive a free ticket.

To make their participation in setting a world record official, players who took part in the tournament have the option to flaunt some proof. Personalized certificates independently produced by Guinness World Records will show that participating players helped make a bit of history. Guinness World Records will charge £20 ($33), plus shipping and handling to produce the certificate. Additional details will be made available on the PokerStars blog after the world record is officially confirmed.

During the period of the Winter Olympics, PokerStars is also offering a way for players to express pride and support for their country’s brightest sports stars while at the virtual tables. From February 7-23, PokerStars will be offering custom-made avatars which feature flags from the nations of the world. Activating the flag avatars is as simple as clicking the “Get Avatar” button on any “Support Your Country” banners in the PokerStars lobby. Another option is to select “Options” from the main menu, click “Country Avatars,” and select the desired avatar from the list of countries.

Would love to participate in this, and effing hate the DOJ right now.