Pokerstars has added Igor Kurganov to its Team Pro roster. With this move, his online poker screen name will shift from “lechuckpoker” to “igorkurganov.” 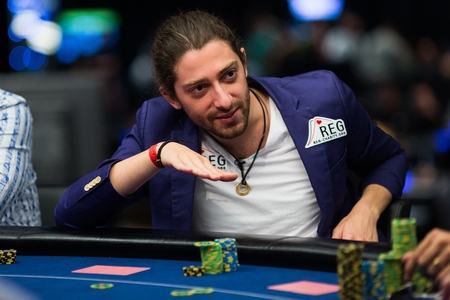 The Russian poker pro is a regular in the highest stakes poker tournaments in the world. This coming May, he will be competing in the $300,000 buy-in Aria Super High Roller Bowl.

Last week, he was one of 35 lucky winners in an entry lottery, allowing him to buy into the 50-player tournament.

Kurganov was a member of the Global Poker League’s London Royals during the inaugural season. The 30-year old joins teammates Vanessa Selbst and Liv Boeree on the Team Pokerstars roster.

Away from the felt, the Russian has a passion for giving back. He’s an ambassador for Raising for Effective Giving (REG), an organization founded by Kurganov, Boeree, Phillip Gruissem, and the Effective Altruism Foundation.

Like many poker players, he often wears the white REG patch during live poker tournaments and donates a portion of his winnings to the charity.

Kurganov is joining one of the most exclusive clubs in poker: the Team Pokerstars roster. Some of the best players in the game today, and all-time, are part of this club.

The face of Pokerstars has always been Daniel Negreanu. Kid Poker heads a list of 28 players from around the world.

Perhaps the second most recognized member of Team Pokerstars is Chris Moneymaker. In 2003, he parlayed a satellite tournament he won on Pokerstars into a $10,000 WSOP Main Event seat. The amateur at the time won poker’s most prestigious event.

Moneymaker’s win helped attract millions of recreational players to the game. He is the only former Main Event champ on the Pokerstars Team Pro roster. Jonathan Duhamel, Greg Raymer, Jerry Yang, and other former world champions were previously part of the team.

“Igor’s mathematical poker mind and passion for giving back to society represent some of the best traits in poker,” he said.

Pokerstars looks for those who will represent the brand on and away from the felt. Kurganov won’t disappoint.

Along with his passion for philanthropy, the Russian has more than $12 million in lifetime live poker tournament winnings, nearly twice as much as anyone else from his native land.

Very good poker player and I’m happy for Igor took his team PokerStars.I believe that he deserved to be in the team of professionals.