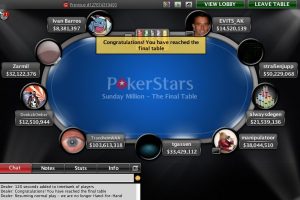 TrondheimAAA from Norway won the PokerStars $5 Million Guaranteed Sunday Million for a first-place prize of just under a half-million dollars. (Image: PokerStars.com)

The PokerStars $5 Million Guaranteed Sunday Million, one of the largest poker tournaments held in online history, concluded a few days ago, with TrondeheimAAA winning the event.

The tournament concluded the PokerStars December Festival, and this particular tournament represented a prize pool that was five times the normal $1 million guarantee.

For this tournament, however, the buy-in remained $215 and as a result, a whopping 31,439 players turned out to create a prize pool in excess of $6 million. TrondheimAAA, who hails from Norway, won the event after 14 grueling hours, taking home $489,130.

With a field of 31,439 players and standard blind levels, it was a safe guess this was going to be one of the longest- running Sunday Million events in history.

After five hours of play, the entire field was cut down to about 5,300 players. At the 10-hour mark, the field was down to the final 100. At the 12-hour mark, the tournament only had 18 players left, with the eventual winner, TrondheimAAA, leading the way.

When the tournament came down to the final nine, he held a massive chip lead, which was more than double what the next competitor had. Eventually, after 14 hours of play, TrondheimAAA emerged the victor.

During the time that play was held from two tables (18 players) down to one (nine players), TrondheimAAA kept increasing his lead. Heading into final table play, it was clear he was the man to beat.

The final table seating was as follows:

When the final table was whittled down to the final six, the players mutually agreed to pause the tournament to discuss a deal. While TrondheimAAA was the overwhelming chip leader, the other players were all within the same range.

The tournament director then presented two deals which both had about the same amount of money going to each player, specifically a “chip chop” and ICM-based figures. Both offers kept $50,000 in the pot to play for. After some negotiating, the ICM model was chosen.

Once the deal was struck, it only took minutes for a few players to be eliminated.

First, it was straßenjupp open-shoving with T-7 offsuit, which was bested by manipulatoor’s A-5 offsuit. Only three hands later saw TrondheimAAA take out EVITS_AK with K-J versus Q-T.

Then, minutes later, Gassen open-shoved with Q-J suited and was called by TrondheimAAA’s K-Q. With a couple of kings hitting the board, Gassen was eliminated in fourth. Two minutes after that, straßenjupp had his pocket deuces put a bad beat on Zarmil’s pocket sixes when he spiked a two on the river, sending Zarmil out in third place.

TrondheimAAA showed K-7 for a flopped two pair, while straßenjupp showed T-5 suited for middle pair and a flush draw. With the turn bringing an 8c and the river a 4c, TrondheimAAA won the extra $50,000 and the title. Here are the final results: