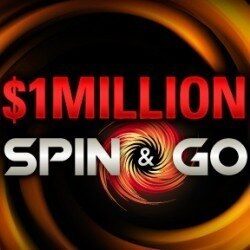 A Russian turned a $5 Spin & Go into $1 million dollars after the prize pool landed on the jackpot. Competing under the moniker “sss66666,” the player bested his two opponents in 13 minutes and 25 seconds.

The PokerStars event was part of its “December Festival” promotion that it had extended through January, giving players the rare chance of competing for $1 million on just a $5 bet.

After four hands, “sss66666” had actually lost more than half of his stack against the other two players.

However, the fast-paced format allowed the Russian to rebound, knocking out the first competitor, “Nonko999,” a Bulgarian, on a quick double up.

The two players fortunate enough to be at the $1 million table were each awarded $100,000 for second and third place.

The Spin & Go format is controversial and somewhat unpopular among more advanced enthusiasts who claim it takes the skill out of the game, but there’s no denying its appeal to the recreational poker player.

SNGs are “winner-take-all” tournaments contested among three players who each begin with 500 chips. Buy-ins usually range from $1 to $30, with the prize pool being decided by a random spin.

The spin determines how much the prize pool will be multiplied by, typically ranging between two and 3,000 times the buy-in. For PokerStars’ “December Festival,” the multiplier was increased to a staggering 240,000.

Of course, more often than not the pool is only multiplied by two.

In fact, about 75 percent of the time the SNG winner will only double his or her money.

So just how unlikely was the $1 million Spin & Go promotion? According to PokerStars, players had a 0.00003 percent chance of sitting down at the $1 million table, meaning “sss66666” was much more likely to have been struck by lightning.

While “sss66666” now has a fortune to live off of, he would be smart to set aside ample funds to hire a chauffeur.

In a bizarre yet (as far as we can tell) true story, the Kremlin passed a controversial law that bans anyone diagnosed with a personality or gender identity disorder from operating a vehicle.

In addition to transsexuals and transgender persons, the ban also prohibits “pathological gamblers” from driving in Russia. The country has long sought answers to its high road accident death rate and overcrowding of highways.

Prime Minister Dmitry Medvedev signed the amendment into law at the end of 2014, but the news wasn’t released until this week.

It would be difficult to assess whether “sss66666” meets the criteria of a “pathological gambler” since little information is available on the unidentified player.

It would be even more difficult to understand how being a gambler or a transgender might inhibit one from being able to operate a car.