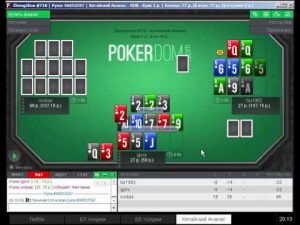 Pokerdom has been a leading pioneer of Chinese Poker games, which are wildly popular with players, yet are rarely found on the internet for real-money outside Tony G’s TonyBet.com.

However, those games have now been temporarily withdrawn by the site, pending an investigation of a bug which players say have led to them losing money.

Several Pokerdom users complained on the Russian language poker forum pokeroff.ru about the peculiar disconnections on the site.

One player said he had lost $541 as a result of one such disruption.

Fouls occur when the three hands fail to ascend in value; for example, if a player is going for a flush in his high hand and fails to get the required fifth card of the suit, so that all he has in his “high” hand is a busted flush.

Meanwhile, a player who makes Q-Q or better in his low hand enters “fantasyland,” where he is dealt, and may arrange, all his cards at once, thus receiving a huge advantage over his opponents.

And according to the Russian forum posters, it’s generally when a player is in fantasyland that the mysterious disruption occurs.

At first the site’s representatives were disbelieving of the reports, asserting that it had to be a problem with the players’ own internet connectivity.

However, players were able to provide proof that their internet connection was stable during the disruption.

Pokerdom has conceded that there must be a bug in the software and promised that it will increase the time bank on each table and provide disconnection insurance on all its OFC tables.

But the fact the disconnection is occurring when a player is in fantasyland and playing with an advantage leads to speculation that there could be something more sinister afoot, as such hackers colluding within the games to disable the edge of their opponents.

It’s not necessarily the whacked-out conspiracy theory it might at first sound.

This led to speculation on internet forums that a DDoS attacker or attackers had found a way to disrupt the servers at strategic moment in order to steal pots.

I am not surprised . there are lots of sinister gamblers looking for an edge , and the hackers constantly seem to become more talented .