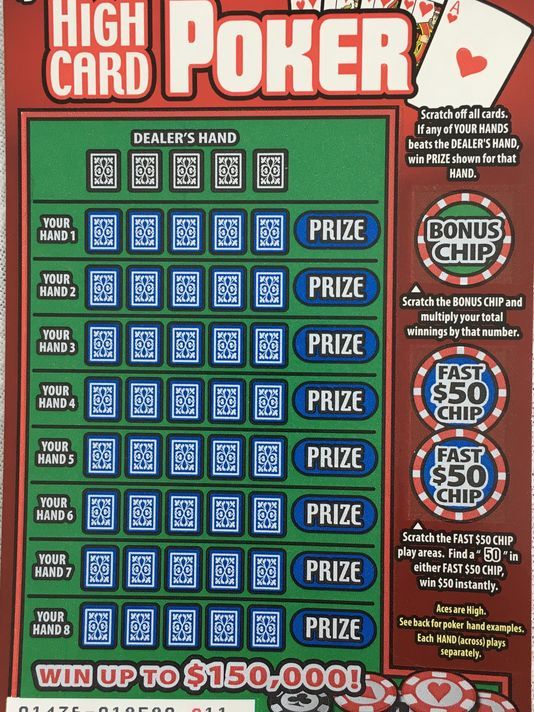 One million High Card Poker lotto scratchers in New Jersey had to be recalled and the game discontinued when some tickers were found to not be abiding by traditional poker rules. (Image: njlottery.com)

Imagine being heads-up for $150,000 in a poker tournament and sticking your money all-in on the river with the nuts, getting called by your opponent, and the dealer says your straight loses to two-pair so the pot is shipped the other direction. That’s essentially what happened to Robert Chalet of New Jersey.

Chalet told TAPinto.net he scratched off a grand prize-winning ticket in the New Jersey lottery game called High Card Poker only to discover he lost. The dealer had Q-10-7-6-4 and he had Q-J-9-6-5. Of course, any poker player would know that Chalet’s queen-with-a-jack made his hand stronger the dealer’s queen-with-a-ten, but this lottery game didn’t see it that way.

When Chalet attempted to cash his ticket, he was told sorry, but he didn’t have the winning hand, because according to the rules of the game (printed on the back), these two hands were a tie, and therefore not valid for a jackpot win.

New Jersey Lottery officials acknowledged the error yesterday, pulling the new game off the shelves just days after introducing it to the public, and sending out workers with wide black markers to scratch out promotions for the game in store windows.

A lottery spokesperson said the state would honor up to 42,796 tickets that should have been winners that paid out $583,000.

The officials claim to have already shipped about one million of 4.3 million tickets they intended to print, and those were recalled immediately from retail outlets.

It was the latest goof for a lottery that has raised many skeptical eyebrows since being handed to private operator Northstar New Jersey in 2013. The contractor was supposed to bring in more money for one of the state’s largest revenue sources by improving technology and game offerings.

Since taking over, Northstar has had to cut budget projections by nearly $1 billion for the duration of its 15-year contract. One reason, the company says, is because millennials are not playing.

The New Jersey Lottery generates roughly $3 billion annually in ticket sales, of which 60 percent of that goes back out in prize money, and 30 percent traditionally has gone to state education funds.

However, in July, Gov. Chris Christie signed a new law that redirects these monies to a public employee pension fund.

Young Americans are showing less interest in buying lottery tickets than previous generations. According to Reuters, overall lotto ticket sales in the United States increased by nine percent in 2016, but millennial participation is falling.

Apparently, throwing away money on a paper game of pure chance isn’t too appealing to the cost-conscious crowd of older teens to young 30somethings.

And while losing millennials could be harmful to the future growth of lotteries, changing the rules of poker doesn’t seem to be making a positive difference.