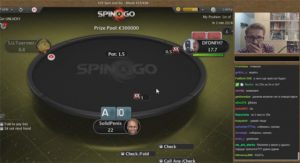 Live poker streaming has become quite a sensation, especially on Twitch. Some have won and lost big while streaming, but no one had a bigger live score than a Russian poker player with the eloquent screen name “SolidPenis”.

Mr. SolidPenis signed up for a €25 Spin & Go on PokerStars France and took it down for €250,000. Never before has anyone live streamed such a massive win. Not even the great Jason Somerville.

Winning this amount of money would come as a shock to anyone who has never won a large sum of cash before. So, naturally, he appeared to be more in shock than exuberant at first. He even questioned if it was real or if he was just imagining things.

Doug Polk, one of the top high stakes pros in the world, held the previous live streaming record ($162,952). He set that record in a $700 buy-in tournament on PokerStars earlier this year. Polk is accustomed to scoring six-figure paydays.

Although online poker has declined in popularity, at least in the United States, the concept of live streaming becomes more popular by the day. Talented pros, such as Polk, show off their poker talents in front of a live audience frequently.

The live streaming concept allows poker fans to catch a glimpse of what it’s like to play poker for a living and pick up on some valuable poker strategy tips. The best streamers are those who know how to engage the audience, and also don’t suck at poker.

That’s why Jason Somerville has become arguably the top online poker streamer on Twitch. His “Run It Up” catchphrase has caught on with his massive audience. Somerville is one of the most charismatic poker players and has a unique way of engaging his audience.

SolidPenis didn’t gloat after winning big. In fact, he appeared to be quite humble, and many viewers agreed.

“I have no words,” he said before using more words, “What important thing can I say at this moment? Be kind to everyone, believe in love, and I won’t say I deserved it or didn’t deserve it.”

Watching this streamer for about a year, I am very glad that he won this jackpot 🙂