Poker Strategy for the Rest of Us: Set Mining in Low Stakes Vegas Cash Games

My last article argued that limping in small stakes Vegas cash games is often our best option. One reason for this is because Vegas players rarely punish limpers, so our limps often survive. Another reason is that the average pot in Vegas is large, so our speculative odds are often excellent. In this article, I’ll discuss the benefits of set mining in small stakes Vegas cash games.

Set mining: If you dig in the right spots, you’re sure to once in a while find gold. (Image: Emerj.com)

“Pair up in threes.”

Set Mining: What are the Odds?

Consider “the rule of twos,” which states that we have a 2% chance of hitting one of our outs for each card to come. (This is a rule we all should commit to memory and use frequently.)

The above math implies that we must average at least 7.3 times our investment when we flop a set. Since we will sometimes flop our set and lose, some pundits suggest that the effective stacks be at least 15 times our investment to set mine profitably. Some suggest 12x, others as high as 20x, but the reality is more complicated than this.

Ask yourself one simple question: Can I make enough average profit in the current situation to set mine? There are several factors to consider:

If the effective stacks aren’t deep enough, we can’t win enough to justify our investment, even if we stack the villain every time.

Extra villains produce a larger pot when we flop a set, improving our implied odds for set mining. Suppose we are in a limped pot with four villains. We’re already getting 4:1 on our investment, so achieving our 7.3x goal when we flop a set is easier. Furthermore, the extra villains make it more likely we’ll get multiple post-flop callers and, perhaps, one of them will stack off.

RIO is the specter of flopping our set, but losing anyway. Our goal may be to stack our opponent, but when we get a lot of action, we could be behind a better hand. A set isn’t always the nuts, and the nuts don’t always stay that way. RIO losses are generally quite large, even if we escape the maximum payment. RIO is the reason the effective stacks rule of thumb is 15x, rather than 7.3x.

It’s relatively easy to make our 7.3x profit in a limped pot, especially in a family pot. But this gets more difficult in a raised, heads-up pot. Suppose we call a 5 BB raise with 3♠3♣. The flop is Q♠9♠3♦. We must win at least $63 in this pot to make our 7.3x return. And considering reverse implied odds, we likely need to win at least $100 when we flop a set. Vegas donkeys don’t worry much about risking $10 or $20, but once the bets get large, many of them become conservative unless they have a big hand. By extension, calling a three-bet for set value is rarely going to be profitable.

Clawback is our net profit when we don’t flop a set. This could be the result of a hand that checks down, or when we spike our set on the turn. Or it may be the result of our ability to outplay our opponents post-flop. Our set mining multiplier is less when we are profitable when we miss. Be careful: clawback can be negative if we play poorly post-flop.

When we have good post-flop position, we are more likely to win the pot when we miss our set. Suppose we face two villains who both check the flop. Our pocket fours may be good, and a bet may take the pot down.

Let’s look at some stats from Vegas $1/$2 NLH game, summarized in Figure 1. The final size of the limped pot averages 20 BBs, easily meeting our 7.3x requirement. But we will do even better than this when we flop a set since this 20 BB average includes many pots where no one has much of anything. Set mining is wildly profitable when we can limp successfully. 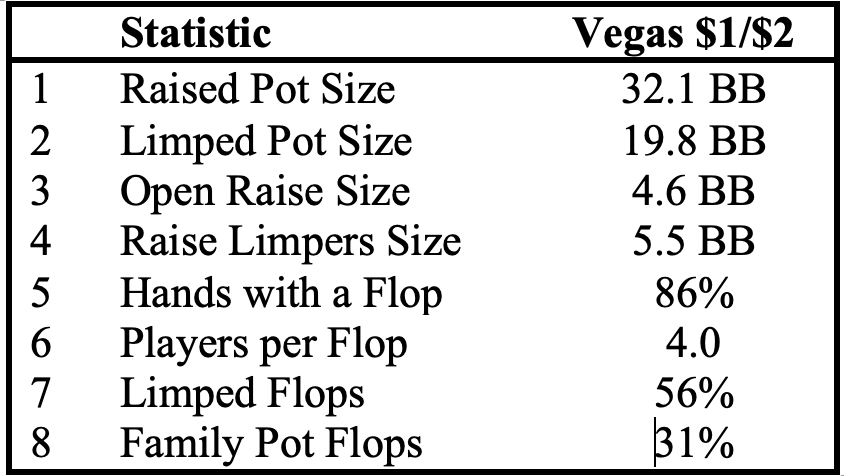 Profitable set mining is clearly more difficult when we call a raise. The average reward is larger (32 BB), but so is the risk. With an average pre-flop raise of 5.1 BBs, our risk/reward ratio is only 6.3x, which isn’t sufficient to justify set mining after a typical 5 BB pre-flop raise.

So we should normally fold our small pairs to an average pre-flop raise, rather than set mine. However, this doesn’t mean that we should always fold them. Sometimes we will have superior position facing a single villain; we may be able to call his raise (or perhaps re-raise) and outplay him post-flop.

Some players like to raise to “five-straight.” This is generally a stupid bet in a Vegas $1/$2 game since it only bloats the pot while allowing opponents to set mine. Vegas villains will rarely fold a hand they want to play to this small raise, so it often generates a family pot, reducing the amount we must win when we flop a set. This is a dead-easy call from the blinds, and usually an easy call from late position.

We are UTG with pocket twos in a passive $1/$2 Vegas game. A normal raise will usually be called by several villains, but a limp is not often raised. So we limp for set value and UTG+1 limps behind. A middle-position player raises to 4 BB; the cutoff and button call. There are now 14.5 BBs in the pot with effective stacks of 80 BBs. We are now getting 15.5/3.0 = 5.2x odds on our call, and the stacks are plenty deep. We only need to win an additional 6.4 BBs to justify set mining here, so it is an easy call. This is a common example of how a failed limp can still work out well for us.

Suppose the villain had raised to 6 BBs from middle position, with no callers. Now we must call 5 BBs in a 9.5 BB pot, and we will be out of position. Although the stacks are 16 times the amount of our call, we should usually fold our small pair unless we have reason to believe the raiser will stack off with a mediocre hand. This is a good example of why our pre-flop raises should be large enough to punish the set miners, especially when there are high-hand jackpots.

UTG limps and a middle-position player raises to five-straight. It’s folded to us on the button with pocket fives. The limper is likely to call, and so might one of the blinds. If no one else calls, we will be heads-up in-position, and may be able to win without improving. Finally, with small dollar-amounts at risk, we are more likely to win enough to justify our investment. We should call.

Suppose we’re on the button with pocket twos, facing three limpers. A normal raise here would be about $16 and we would rarely take the hand down right away, often facing at least two villains on the flop. Since it’s more difficult to outplay two villains than one, profitability is more difficult if we raise here.

But limping is relatively safe since Vegas players rarely try to steal from the blinds. Limping will usually create a six-way family pot, an excellent situation for set mining. We have invested only 1 BB and we already have nearly the correct odds for set mining. Furthermore, when we do flop a set, we are much more likely to win a big pot since we are facing five villains, who are often very sticky for a street or two.

UTG limps and a strong middle-position player raises to 7 BBs. We are next with pocket sixes. Effective stacks are 100 BBs, which would seem to be sufficient for set mining. But we would need to average a $102 profit when we flop a set, an amount we are less likely to realize against a strong player. With players behind us that might attempt a squeeze, we should fold or, possibly, three-bet.

A middle-position player opens to $12 with only $50 behind. It folds to us in the CO with pocket fours. The maximum we can win from the raiser is $60 (having subtracting the rake), so we can’t play the hand for set-mining purposes. Plus, the players behind us might try to squeeze. Our decision here boils down to whether we think we can outplay this villain post-flop, and what we think will happen if we call. Three-betting to isolate him is also a good option.

A weak, middle-position player open limps and it folds to us with 22 on the button. We could limp behind, perhaps generating a four-way flop, but a raise to 5 BBs is likely to win the current 2.5 BB pot or create an 11.5 BB heads-up pot where we have superior position. We should raise our pocket twos.

Set mining by limping can be very profitable in a low-stakes, live cash game since our opponents are passive and sticky. We can also call a raise under certain circumstances, such as when the raise is small or when there will be at least two callers.

As such, the question to ask is, can I win enough profit by set mining in the current situation? The answer depends on the relative level of our post-flop skills.