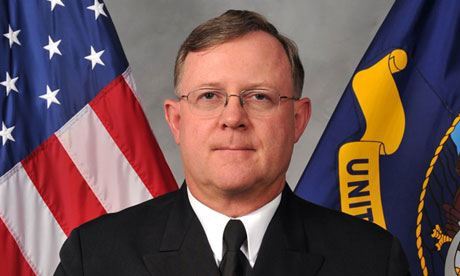 Would you trust this man with a nuclear arsenal? Former Rear Admiral Tim Giardina may have made fake poker chips himself with stickers and glue. (Image: www.theguardian.co.uk)

Rear Admiral Timothy Giardina, who was fired from his position as number-two commander of US nuclear forces after he became embroiled in a poker cheating scandal, may have constructed the offending counterfeit chips, according to new revelations.

Giardina, as we reported at the time, was sacked in October 2013 for his questionable gambling habits, although the suggestion that he may have been responsible for making the fake chips himself using stickers and glue, has only just surfaced, thanks to documents obtained by the Associated Press.

According to the details of the criminal report, which was requested this week by AP journalists under the Freedom of Information Act, investigators suspected Giardina was the main culprit and architect of the scam after they found his DNA on the underside of a sticker which had been used to make $1 chips look like $500 chips. Giardina has maintained his innocence, claiming he bought the three chips in the restrooms from a stranger for just below their fake face value.

However, he subsequently retracted that statement, saying that had he merely “found” the chips in a stall in the restrooms, before an “error of judgment” possessed him to put them into play at the poker table.

“I should have either told the truth or remained silent instead of lying about the events when questioned,” he told the court. “This lapse in judgment does not make me a thief and a criminal… Regardless of anyone’s opinion on the matter, disapproval of the legal manner in which I spent portions of my off-duty time is not adequate grounds to allege criminal misconduct,” he added.

The courts reluctantly agreed, deciding against charging Giardina with counterfeiting and fraud due to concerns that evidence would fail to hold up in court, instead finding him guilty of two counts of conduct unbecoming of an officer: lying to a police officer and passing fake gambling chips. He remains on the navy payroll as a staff officer in Washington but was given a written warning and fined $4,000.

However, the documents obtained this week also cast new light on Giardina’s erratic behavior in the months leading up to the incident, as well as concerns that he was not a man fit to be privy to highly sensitive state secrets affecting national security, less still to be second in command of America’s entire nuclear weapons force.

The report reveals Giardina to be a habitual gambler with a propensity for getting barred from casinos. In July 2013 he was banned from the Horseshoe and Harrah’s in Council Bluffs, Iowa, for 90 days, but returned to the Horseshoe at least twice during that time, the second time earning a lifetime ban from all Caesars properties. The report said that a review of Horseshoe surveillance footage revealed “odd behaviors,” including apparently “taking cigarette butts out of public ash trays and smoking them.”