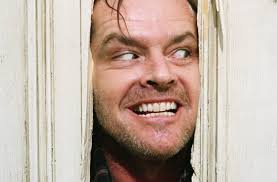 Chopping the Pot? An axe-wielding maniac, similar to the one depicted here by Jack Nicholson, was sent to prison in the UK for attacking his victorious opponent in a barber’s chair this week. (Image: Warner Bros)

A sore poker loser who attacked his vanquisher with an axe as he sat in a barber’s chair was sent to prison for 27 months by a UK judge this week, as reported by the Gloucestershire Live.

Victim Scott Hayward, who had only visited his local barbershop for a quick trim, got way more than he bargained for: a full blown axe attack, meted out by aggrieved business student Kiano Haughton-Jones, whom Hayward had bested at the poker table a few weeks earlier.

In one of the grisliest stories we’ve ever covered at CardsChat, the court heard that Hayward was in the chair having his hair cut at Sam’s Barbers, in the English West Country town of Gloucester, when Haughton-Hones walked in, pulled out an axe and plunged it into the victim’s arm.

“He pulled out a small axe from the waistband of his trousers and held it up. He said he was going to ‘stick it to’ Mr Hayward,” explained prosecutor Janine Wood.

According to Wood, there had been “bad blood” between Haughton-Jones and Hayward ever since the poker game, when the victim won an unspecified amount of money from his assailant.

Haughton-Jones then fled the barber’s shop on foot only to be arrested five days later in the nearby town of Cheltenham. Witnesses later picked the axe-man out in an identification parade.

Having initially pleaded not guilty on the grounds of “self-defense,” Haughton-Jones quickly came to realize that his defense was as shaky as his poker playing skills and admitted unlawful wounding and being in possession of an axe as an offensive weapon in a public place

“I was admitted to Gloucestershire Royal Hospital,” said Hayward in a victim impact statement. “I was in a lot of pain. The drugs I was given for the pain didn’t touch it. I have had to have had to have two operations to repair the nerve and tendon damage in my hand. I still have no feeling in the little finger. I will need further physio.

“There had to be security on the ward because of concern he might find out where I was and cause me more injury.”

Haughton-Jones’ defense lawyer Steven Hadley conceded that his client has a “bad criminal record” but insisted it was pure coincidence that the two men were at the barbers at the same time.

“The meeting of the victim there was by chance,” he said. “The defendant had in the past had a number of threats made against him and that is why he had an axe with him. It cane as a surprise to both men to find themselves face to face. My client pulled out the axe because he feared some form of attack. He accepts he then went over the top.”

Let this be a warning to talented poker players everywhere.

This seems like a good time to recommend Jared Tendler’s The Mental Game of Poker.

that ship has well and truly set sail!

i’m sure it must have been an axeident.