While some players like to needle their opponents at a poker table British professional William Kassouf is turning it into an art form and not making many friends doing so. 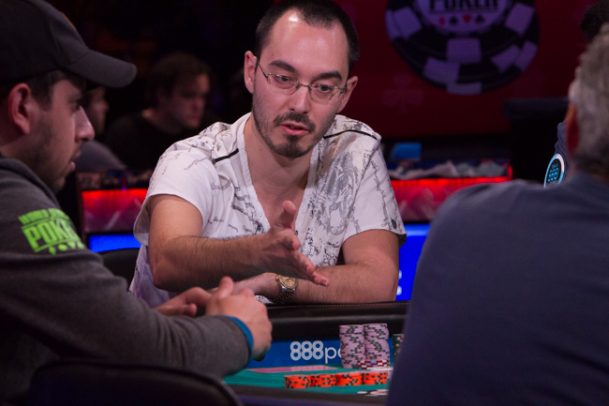 William Kassouf is known for his talkative style of play and he recently employed it to pull off an epic slow roll that was captured by cameras. (Image: PokerNews.com)

On August 30 at the Bicycle Casino in Bell Gardens, a suburb of Los Angeles, the trash talker played an epic slow roll while employing his infamous grating commentary. The YouTube video of the “Live at the Bike” can be found here:

He was part of a $5-$5 No Limit Texas Hold ’Em game and was dealt pocket sixes and a player only known as Derek had a pair of eights. The flop was 8♣ 6♣ 6♦ and Kassouf started running his mouth, announcing to the table that he had four of a kind.

“How should I play quads, guys?” he asked the table. “Should I bet it or check it?”

Five players remained to the turn, which was a 4♠ and Wayne Chiang threw $35 in the pot. He started his infamous slow play tactics while talking to no one in particular.

“How can I lose with quads here?” he said. “Only a straight flush or if he has eights full and an eight comes on the river.”

The last card was a 4♥ assuring hehad the nuts, but he wasn’t done jabbering. “Runner, runner, who’s got the four now?”

After Chaing bet $60 and an excruciating amount of time had passed, he raised to $225. Derek re-raised $800, putting him all in and Chiang folded. After another stall he pushed his stack in. Another delay and he finally showed the nuts, taking down a $1,465 pot. The hand took nearly seven minutes to play.

Kassouf’s opponent took the defeat a lot better than other people who have interacted with the brash player. Cliff Josephy called him a clown one time and he has three incidences chronicled on video where he has taunted other players.

One was Vanessa Selbst, who apparently went on tilt with his incessant chatter at the 2016 EPT Main Event London. She ended up getting busted out by her new foe.

He received a penalty for his antics in the WSOP the same year. He was haranguing Stacy Matuson so bad that a tournament director had to intervene. He was warned but kept up his strategy. After he got Matuson to fold queens on his bluff an official told him he had received a one-round penalty.

His most famous clash was with Griffin Benger at the 2016 WSOP Main Event. He held kings to Benger’s aces and after what seemed like an hour of peppering his opponent, Benger snapped. He accused Kassouf of being verbally abusive and then got the satisfaction of busting him from the tournament.

While poker pros might not prefer his shtick television cameras can’t get enough of him. The ESPN clip on YouTube of the Benger altercation garnered more than 30,000 views and his dust up with Selbst got 152,000 views.

It seems if there is a camera nearby he will find it. He recently joined two other famous talkers, Phil Helmuth and Mike ‘The Mouth’ Matusow for an episode of Live at the Bike and was also on Poker After Dark with Matusow.

Kassouf is Pro? 😀
I would love to play a cash game against him, not mtt because I would have more time to get him to madness 😉