David Williams has pulled in more than $8.5 million in live tournament cashes over his lifetime, and holds a World Series of Poker (WSOP) bracelet from 2006 in the $1,500 Seven Card Stud event. But on MasterChef, the assiduous poker pro couldn’t quite make his bid to prove he is as adept at baking souffles as he is at winning pots. 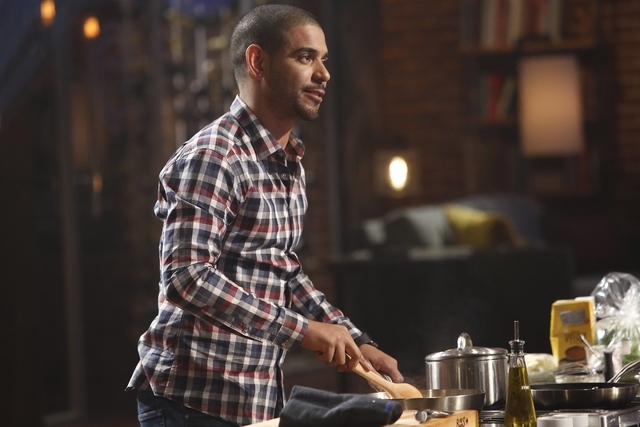 David Williams finished in the top three in the latest season of MasterChef US. (Image: FOX)

After proving he has some cooking chops in the preliminary rounds, Williams “last supper,” which consisted of a three-course meal, just wasn’t good enough to beat the eventual winner, Las Vegas-based nightclub DJ Shaun O’Neale.

Heading into the finale, Williams told reporters that he wasn’t nervous in the slightest. Having performed on the biggest stages in poker and taken down multiple tournaments, including that WSOP bracelet, the 36-year-old father of one is used to handling pressure, and possibly pressure cookers as well.

As the eventual winner, O’Neale faltered with his starter by pickling a morel mushroom and upsetting the judges, while Williams remain composed. Serving up an appetizer of cured salmon, the poker pro received praise from all four judges, including the infamously tough and tart-tongued Gordon Ramsay.

When he started shooting on the show last May, Williams told Las Vegas Review-Journal reporter Christopher Lawrence that his cooking acumen was largely learned on the fly.

“. . . being in Vegas, I’m exposed to so many amazing restaurants and amazing meals that I actually wanted to know how and why things worked,” Williams said. “. . . Literally, everything I learned was YouTube videos and reading recipes and blogs from other chefs or home cooks.”

But after a strong start on MasterChef, his performance started to fall apart.

A problem peeling his hard-boiled eggs on the main course set Williams back, leaving him in a vulnerable position. Eventually, despite the judges offering their compliments, Williams finished in the same spot he secured in the 2004 WSOP Main Event, namely, as a runner-up.

Following the show’s airing on FOX, Williams was gracious enough to say that his best efforts just weren’t good enough on that day.

“They got it right. He was the best on day 1. The best throughout the show and the best in the finale. Congrats @djshaunoneale #MasterChef,” tweeted Williams.

In addition to receiving praise from his friends in the poker community, Williams managed to break the fiery façade of Gordon Ramsay and earn a compliment out of the notoriously grizzly chef.

“Well done to @dwpoker @brandi_mudd & @djshaunoneale on a great night. You should be very proud of all your accomplishments on #MasterChef Gx,” wrote Ramsay.

So, what’s next for Williams? Although he missed out on $250,000 and a cookbook deal, Williams could still have a career working with food in his future. During his time on the show, he was one of the more likeable contestants, and with a new set of skills on his side, there’s no reason he couldn’t carve out a niche for himself as a TV chef.

Of course, with poker always on the back burner, it’s unlikely Williams will be throwing his cards into the muck completely and taking up a job in a professional kitchen. But, if there’s a spot free in the WSOP canteen next summer, we’re pretty sure that everyone will be clamoring to samples his culinary creations.

Although he’s continued to steadily cash in tournaments, Williams’ last seven-figure win was six years ago, in the WPT $25K NLH event, where he took first for a $1.53 million payday. Check out a bad beat from 2010 below, when the poker star appeared on the PokerStars Big Game with fellow stars Daniel Negreanu and the legendary Doyle Brunson.

I really enjoyed watching him on the show and it’s nice to see a poker pro expand themselves beyond poker.

Not a nice guy. He didn’t deserve to win. Has a temper.

David Williams. I thought this guy was my friend. Instead he blocks me. I see why people say he has a temper. He’s a jerk. He didn’t win because he has to much attitude. He is not a good poker player either. He owes me money and wont pay back. No friend of mine.

He lost cause Gordon knows this guy is not a good ambassador. Pay my money David.