Poker Players Sound Off on Final US Presidential Debate 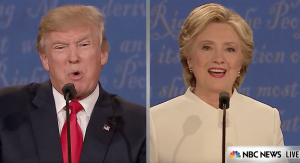 Many poker players on Twitter sounded off of the final debate between Donald Trump and Hillary Clinton. (Image: Business Insider)

Many poker players weren’t concerned so much with dodging two-outers on the river on Wednesday night.

According to a CNN poll following the debate, 52-percent of voters said the former First Lady won and 39-percent claimed the billionaire won.

That is pretty close to the same differential in recent pre-election polls, which proves most people claim their candidate won the debate no matter what.

The opinions of the debate were no different among poker players on Twitter. Those who support Trump said he performed well. Those who support Hillary said otherwise. And those who despise both were unimpressed with the entire debate.

Take poker pro Connor Drinan for example. He woke up at 3:00 in the morning over in Europe to watch the debate and was disappointed he wasted his time.

“So sick of hearing these 2 idiots speak,” he posted on Twitter.

Mike Matusow doesn’t share Drinan’s opinion on the candidates. Well, on one candidate he does. The Mouth is the biggest Trump support in the poker world. He’s spent more time bashing Hillary than he has defending his candidate.

But on Wednesday, following the debate, Matusow re-tweeted posts defending Trump’s refusal to commit to accepting the outcome of the election should he lose.

Trump supporters aren’t the only ones speaking up on Twitter. Hillary has a fair share of poker players who are “with her.” Brian Rast is one among that group.

Trump, prior to and during the debate, has claimed the upcoming election is rigged. The anti-Trump crowd considers these comments dangerous and a slap in the face to American democracy.

Negreanu has been one of Trump’s toughest critics. The Canadian-born poker pro became a U.S. citizen recently and admitted he is excited to be able to vote against the Republican nominee. Kid Poker hasn’t been impressed with Trump or any of his debate performances.

Determining a debate winner is meaningless. The only polls that matter happen on November 8 when the next President will be announced.

With less than three weeks remaining, Hillary Clinton holds a huge national lead over her opponent. According to FiveThirtyEight’s current polling model, Clinton has an 86.4-percent chance of winning the election.

Paddy Power, a sports betting website in Ireland has already paid out winning tickets to those who wagered on Clinton to win the election.

The company has made the assumption the Democratic nominee has the election wrapped up and is taking the risk in paying out winners early for good publicity.

Glad this debate nonsense is over and will be happier when the political ads are over. On another note, all you Trump supporters be sure to do as your candidate asked and get out there and vote on November 28th.

LMAO, What a noob